Italian Museum Wants Germany to Return Painting Stolen by Nazis
The director of a well-known art museum in Italy is urging Germany to return a Dutch painting stolen by Nazi troops during World War II.
Eike Schmidt is director of Uffizi Gallery, a museum in the Italian city of Florence. He is making the issue known by hanging a black-and white image of the painting. The word "Stolen" appears on the image in three languages.
Schmidt said this week that the painting "Vase of Flowers" by Dutch artist Jan van Huysum is in the hands of a German family that has refused to return it – even after many appeals. Representatives for the family have demanded payment for its return to Italy.
The "Vase of Flowers" painting is worth millions of dollars. It was first put on display in Florence in 1824, after Grande Duke Leopoldo II bought it for his art collection.
Schmidt said, "The painting is already the inalienable property of the Italian State, and thus cannot be ‘bought."
The oil painting hung as part of Leopoldo II's collection from 1824 until World War II. It was moved to a village for safety during the war, but Nazi troops stole it. It did not appear again until Germany reunified in 1991, when the offers to sell it back to Italy began.
Schmidt, who is German, said issues like these are preventing the healing of wounds from the war. "Germany should not apply the statute of limitations to works of art stolen during the war," he said, adding that the country must ensure those works are returned to their owners.
He called it Germany's "moral duty" to return the artwork. "I trust that the German government will do so at the earliest opportunity," he said."
I'm Alice Bryant.

The palace, which was damaged by bombs in World War II, still stood.
二战中遭到轰炸的那座宫殿依然矗立着hmgA5mU7aIu@|CI-rE=。

The oil painting depicts up the grand scene of the Red Army crossing the snow-capped mountains.
油画再现了红军过雪山的雄伟场面I-X%FdYMcg1W。

Protecting environment is every citizen's responsibility and moral duty.
保护环境是每个公民的责任与义务hc]l3KT,uw#qDE。

5.It was first put on display in Florence in 1824, after Grande Duke Leopoldo II bought it for his art collection.

At the 2012 consumer electronics show, Samsung won 30 innovation awards for the breadth of products it put on display.
2012年的消费电子展上，三星参展的众多产品共获得30项创新奖QwvL64p_OIpV2。
The birds were put on display at the zoological society.
这些鸟类将在动物协会展出&Uy=+I5.trS3eG。

6."I trust that the German government will do so at the earliest opportunity," he said."

at the earliest opportunity 尽早 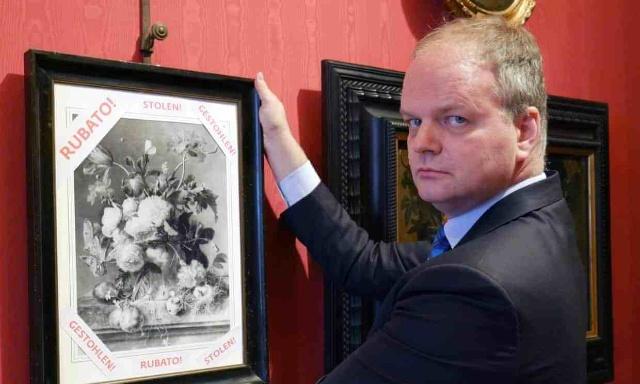