Man Leaves $11 Million Surprise Gift to Children’s Groups
Alan Naiman was known for being very careful about how he spent his money. But even those closest to him had no knowledge of the fortune he quietly gathered and the last act he had planned.
Naiman died of cancer at age 63 last January. The man from the American state of Washington gave most of his money to groups that help the poor, sick, disabled and abandoned children.
He gave them $11 million.
The large amount of his fortune shocked the groups that received his gifts and even his best friends.
That is because Naiman had been known to repair his own shoes with duct tape. He had sought deals to buy food from grocery stores at closing time and had taken friends out to lunch at low cost restaurants.
Naiman died unmarried and childless. He loved children but also was intensely private, his friends say. He saved, invested and worked extra jobs to gather money. He rarely spent the money on himself after seeing how unfair life could be for children who suffer the most.
His friends believe a lifelong desire to help his older brother who had a developmental disability influenced Naiman. Yet he rarely spoke of it. His brother died in 2013.
His close friend Susan Madsen told the Associated Press, "Growing up as a kid with an older, disabled brother kind of colored the way he looked at things."
A former banker, Naiman worked for the past 20 years at the state Department of Social and Health Services. He earned $67,234 a year and also took on side jobs. Sometimes, he worked as many as three at a time.
He saved and invested enough to make several millions of dollars. He also received millions more from his parents after they died, said Shashi Karan, a friend from his banking days.
Naiman was pleased when he was able to make use of the reduced prices many companies and organization offer older people. He bought his clothes from large self-service stores. He loved cars, but for most of his life, he drove worn-out vehicles.
After Naiman's death, Karan recognized how little he knew about his longtime friend. "I don't know if he was lonely. I think he was a loner," Karan said.
Many of the organizations that received Naiman's gifts said they did not know him, although they had crossed paths.
He left $2.5 million to the Pediatric Interim Care Center in Washington. The center is a private organization that cares for babies born to mothers who abused drugs and children with drug dependency.
Naiman had called the center about a newborn baby while working for the state more than 10 years ago. Barbara Drennen, who established the center, said, "We would never dream that something like this would happen to us. I wish very much that I could have met him. I would have loved to have had him see the babies he's protecting."
The center used the money to pay off its mortgage and buy a new vehicle to transport the children.
Naiman gave $900,000 to the Treehouse, a foster care organization. He had brought children in his care to the group's house, where children without parents can choose toys and necessities for free.
Treehouse is using Naiman's money to expand its college and career support services statewide. Jessica Ross, who works with Treehouse, commented that Naiman's savings and cost cutting were for this purpose.
She called it a "pure demonstration of philanthropy and love."

I'll pay off my debt with this check.
我将用这张支票清偿欠债!Q.9D1WY_]。

The blog is still a side job, but hopefully by the end of 2008 it can become full-time!
博客仍然是一项兼职工作，但有望在2008年底前成为全职！

5.Sometimes, he worked as many as three at a time.

Can I borrow two books at a time?
我可以一次借两本书吗？
He was able to spend only a few days at a time on the island.
他每次去岛上都只能呆几天8b5j91^f|OIbET(。

6.Naiman was pleased when he was able to make use of the reduced prices many companies and organization offer older people.

We should train them to make use of reference books.
我们应训练他们学会使用参考书x0AU1-_9MkIv。
There is a great deal here that you can make use of.
这里有许多东西你可利用0hiB(eV3L8D.v;-。 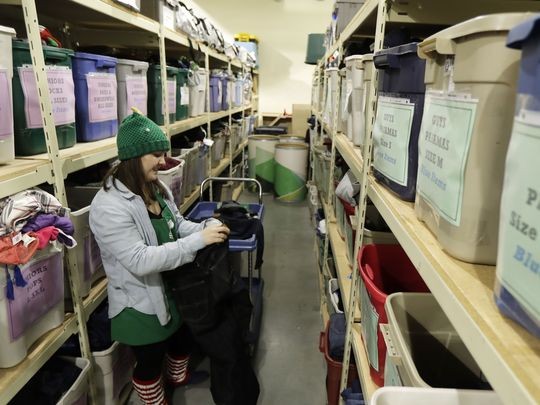