Boy Asks Town to Lift Snowball Fight Ban
This is What's Trending Today...
Cold, snowy weather has arrived in many places. That means young people are enjoying building snowmen, going sledding and having snowball fights.
But in one small American city, snowball fights are illegal.
Welcome to Severance, Colorado. The town, north of Denver, gets about 100 centimeters of snowfall a year. For almost 100 years, city rules have said it is illegal to throw or shoot stones or missiles at people, animals, buildings, trees, property or vehicles. Snowballs were considered to be part of the town's definition of "missiles."
Kyle Rietkerk works for the town of Severance. He said children cannot believe that it is illegal to have snowball fights in their hometown. He said town leaders have for years told the children, ‘You have the power, you can change the law.'
But no one had tried -- until now.
Nine-year-old Dane Best lives in Severance with his parents and little brother. He has made it his mission to get the snowball-fight ban overturned.
Dane says he believes the law is "outdated."
"I want to be able to throw a snowball without getting in trouble," he said.
Dane's mother, Brooke Best, told The Greeley Tribune newspaper that her son found out it was illegal to throw snowballs within town limits about a month and a half ago. Since then, he has been talking about how to change that.
Dane wrote letters with his classmates in support of overturning the ban.
And on Monday, he spoke about the issue at a Severance town meeting. Leaders listened as Dane presented his arguments. Then, they all voted to lift the ban.
Dane says the first person he hopes to hit with a snowball is his four-year-old brother.
Dane and his family have researched other Severance rules, including one that defines pets only as cats and dogs. Dane has a guinea pig, which appears to be illegal in Severance, too.
And that's What's Trending Today.

Until now, the Americans have been playing a very delicate political game.
直到现在，美国人一直玩着精心设计的政治把戏fqQNlxZm*1E~u|C。

I think we may have found the perfect guinea pig.
我想咱们也许找到了一只绝好的豚鼠bq+yFPnj6SY0.p。

The girl had found out about the goings-on in the factory.
这个女孩已经发现了工厂里的勾当!Y6Cu.MHTH4*lJBXwf4t。

The village children are running in the snow, some in the snowman, some are having a snowball fight.
村里的孩子们在雪地里疯跑着，有的在堆雪人，有的在打雪仗[KYWcN=jUcS),1]ZU。

5."I want to be able to throw a snowball without getting in trouble," he said.

I wouldn't want you getting in any trouble.
我可不想让你惹上麻烦(B[QYtjCD^A3rq1J。
My heart is what keeps getting me in trouble.
我就是太随性才会惹麻烦的0vt0r_.J5BX。

6.Dane wrote letters with his classmates in support of overturning the ban.

in support of 支持

We must produce evidence in support of our theory.
我们必须提出证据以支持我们的理论L5CTbM2^s)*CT,。
They are raising a fund in support of this good cause.
他们正在为赞助这一有益的事业而集资,mszipz65jw]V。 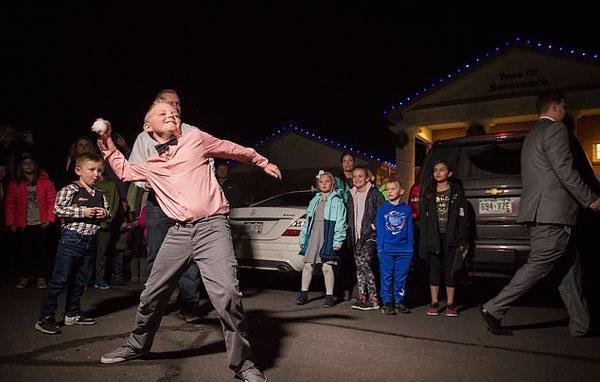