George H.W. Bush's Service Dog Sully Stays by His Side
The body of America's 41st president, George H.W. Bush, has been placed inside the U.S. Capitol building. People began lining up in the early morning hours Tuesday for the chance to honor Bush, who died Friday at the age of 94.
All day, thousands of people walked by his flag-covered casket. Alongside them was someone that came into Bush's life only recently: his service dog, Sully. Bush received Sully in June from America's VetDogs, an organization that trains dogs to help war veterans and active military members.
Bush was a pilot for the U.S. Navy during World War II. His plane was shot down during a bombing mission over the Pacific Ocean. Later in his life, he developed a form of Parkinson's disease. He used a wheelchair in his final years.
Sully, a two-year-old yellow Labrador retriever, helped the former president do things such as open and close doors, pick up objects and seek help if needed.
But above all, the dog was a "wonderful companion," said Bush aide Evan Sisley. Bush got Sully just two months after the death of his wife of 73 years. Barbara Bush died in April at the age of 92.
Sully has remained by Bush's side since his death Friday. On Sunday night, Bush spokesman Jim McGrath shared an emotional photo of the loyal dog lying on the ground in front of Bush's casket.
"Mission completed," McGrath wrote, along with the hashtag #Remembering41. The image has been shared more than 65,000 times.
When Bush first got Sully, he wrote about the dog on Twitter. He said, "A great joy to welcome home the newest member of our family, "Sully," a beautiful -- and beautifully trained -- lab from @AmericasVetDogs. Could not be more grateful..."
America's VetDogs says Sully will soon begin working at Walter Reed National Military Medical Center's Facility Dog Program. The medical center is just outside of Washington, D.C. There, Sully will help wounded soldiers as they go through physical therapy and other treatments.
George W. Bush, America's 43rd president and son of George H.W Bush, made note this week of the happiness Sully brought to his father.
The younger Bush wrote on Instagram, "As much as our family is going to miss this dog, we're comforted to know he'll bring the same joy to his new home, Walter Reed, that he brought to 41."
And that's What's Trending Today.
I'm Ashley Thompson.

I hate lining up in the cold to go to a cinema.
我非常讨厌在大冷天里排队等着看电影1!QDh[71WJj%.|q。

Experts reveal only as much as they care to.
专家们只透露了他们想透露的那些[hMyvIgNzP7.+eBm=。

After almost a year of physical therapy, I still had the limp.
经过几乎一整年的物理治疗，我还是一瘸一拐Qi6mA13P;Lw。

5.Sully will help wounded soldiers as they go through physical therapy and other treatments.

6.But above all, the dog was a "wonderful companion," said Bush aide Evan Sisley.

Above all, we should recognize our strengths and weaknesses.
首先，我们应该认识自己的优点和缺点(N86U,T0#M。
Above all, I want to thank all my fans for their support.
首先，我要感谢所有歌迷对我的支持|Ga8psxmzIu9x5#-!0d。 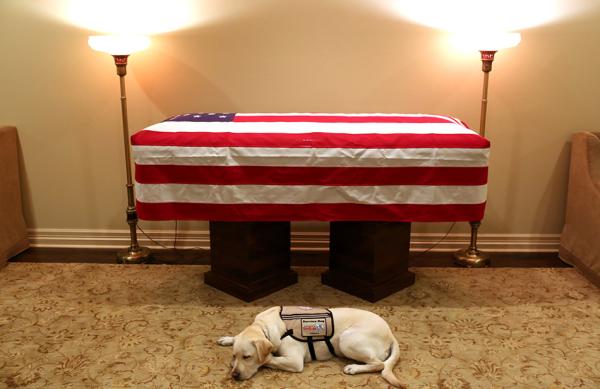