Trump Thanks Saudi Arabia for Keeping Oil Prices Down
President Donald Trump has publicly thanked Saudi Arabia for holding down world oil prices.
"Oil prices getting lower," Trump wrote. "Great! Like a big Tax Cut for America and the World. ... Thank you to Saudi Arabia, but let's go lower." His comments appeared on the news and social messaging service Twitter.
While the United States is the world's largest producer of oil, Saudi Arabia is the biggest oil exporter.
Trump's tweet comes one day after the president said he would not punish the Saudi government for the killing of Jamal Khashoggi. The U.S.-based Saudi journalist went missing last month after entering Saudi Arabia's diplomatic offices in Istanbul, Turkey.
Before leaving Washington and going to Florida, Trump told reporters that national security and economic interests are more important than human rights concerns.
Punishing Saudi Arabia "would be a terrible mistake," he said, adding "we're staying with Saudi Arabia."
Trump said the Saudi government's purchases of American military equipment are worth "hundreds of thousands of jobs and billions of dollars of investment."
Russia and China "are not going to get that gift," Trump said.
While noting Saudi Arabia's opposition to Iran, Trump talked mostly about oil. He said that oil prices would rise a lot if the United States broke with Saudi Arabia.
"I'm not going to destroy the world economy and destroy the economy for our country by being foolish with Saudi Arabia," he added.
'Maybe he did, maybe he didn't'
Reporters asked Trump about a Central Intelligence Agency (CIA) report that said Saudi Crown Prince Mohammed bin Salman likely knew about or ordered the plot to kill Khashoggi.
The president answered: "Maybe he did, maybe he didn't." He added that the CIA's report was not "definitive."
The president denied that his decision not to punish the Saudis for the killing had anything to do with his own business interests.
"I don't make deals with Saudi Arabia. I don't make money from Saudi Arabia," Trump said.
Earlier in the day the president said that some members of Congress wanted to take steps to punish Saudi Arabia "for political or other reasons."
"They are free to do so," he said. Trump also said he would consider ideas from Congress if they provide for the "security and safety of America."
The Saudi government has cleared the crown prince of the murder. It is holding 21 people in connection with the case and called for five to be put to death for the murder.
Turkish reaction
On Wednesday, Turkey accused the United States of trying to turn a blind eye to Khashoggi's murder. It also dismissed Trump's comments on the issue as "comic."
"Yesterday's statement is a comic statement," said Numan Kurtulmus, an official of Turkey's ruling AK Party. "It is not possible for an intelligence agency such as the CIA ... to know who gave this order," he added.
Turkey has repeatedly said the order to kill Khashoggi came from the "highest levels" of the Saudi government. However, it has not directly accused Prince Mohammed, noted the Reuters news agency.
I'm Susan Shand.

He never could hold down a job.
他从来都保不住自己的工作C,cnIG_~5K(*Hdq)83k。

With the development of technology and the world economy, the business environment has gone through a tremendous change.
随着世界经济和技术的发展，贸易环境发生了巨大的变化g;MlHB05Pz-WCeg&3K!。

He argued that the tax cut was ill-timed.
他认为减税不合时宜n6ELu2sRWwD_t7d]Hn|。

5.The president denied that his decision not to punish the Saudis for the killing had anything to do with his own business interests.

had anything to do with 与...有关

6.On Wednesday, Turkey accused the United States of trying to turn a blind eye to Khashoggi's murder.

turn a blind eye to 对...视而不见 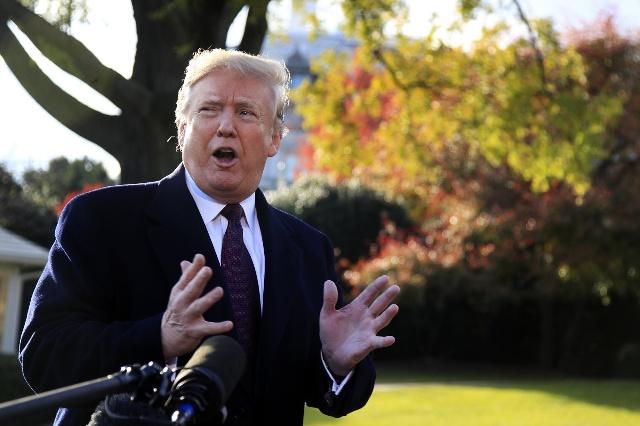