US: 80,000 Flu Deaths Last Winter
United States health officials say an estimated 80,000 people died of influenza and problems resulting from the flu last winter.
The director for the U.S. Centers for Disease Control and Prevention (CDC) reported the number to The Associated Press. It represents the largest number of flu deaths nationwide in at least 40 years.
Health experts were expecting the winter of 2017-2018 to be a bad year for flu deaths, but not that bad.
Doctor William Schaffner is an expert on vaccines. He works at Vanderbilt University in Tennessee. Schaffner noted that 80,000 deaths is nearly two times as much as what health officials once considered a "bad year."
CDC officials say that between 12,000 and 56,000 Americans die every year from flu-related causes.
While 80,000 deaths seems high, the exact number could be even higher.
CDC officials do not have an exact count of how many people die from the flu each year. Influenza is a relatively common disease and not all flu cases are reported. Also, flu is not always listed on death records as the official cause of death. For that reason, the CDC must estimate the number of dead based on statistical models.
While last winter was a bad flu season in the U.S., it was not the worst.
The 1918 flu pandemic lasted nearly two years. Historians estimate that the disease was to blame for between 500,000 to 700,000 deaths during that period. The exact number is still not known.
One thing that made the 2017-2018 flu season so bad was that the strain of the flu virus was strong. Usually the disease kills the very young, the very old or those who are already sick. However, last winter, the flu killed many healthy Americans.
Another thing that made the flu season so deadly was that the flu vaccine was not as effective as experts had predicted.
In a 2017 statement to the press, the World Health Organization said that every year up to 650,000 deaths are connected with influenza or influenza-related illnesses. This is a new estimate by the U.S. CDC, the WHO and global health partners. This is more than the global estimate from ten years ago. At that time, experts estimated that between 250,000 to 500,000 people died from influenza or influenza-related illnesses.
Back in the U.S., health officials are predicting a weaker strain of flu virus this coming winter. Drug makers have made changes to the vaccine. Even though the vaccine did not work well last year, health experts still strongly suggest getting vaccinated.
I'm Anna Matteo.

They lost their way in the desert and died of thirst.
他们在沙漠中迷路而渴死了P)QTOLDqQUv-。

He's been away for at least a week.
他走了总有一个星期吧#,niaCl7!;sMb(k。

Wild and farm birds often have a flu virus.
野生和农场的禽类经常感染流感病毒OC,E0R9Vazs^%。

The reports were based on inaccurate information.
这些报告所依据的是不准确的信息nOlL&w59D&7^y。

5.Schaffner noted that 80,000 deaths is nearly two times as much as what health officials once considered a "bad year."

Experts reveal only as much as they care to.
专家们只透露了他们想透露的那些USKobI@lf[|p。
I had to fall in with her wishes as much as possible.
我不得不尽量顺从她的意愿obaLyZ*1Lj5UW。

6.At that time, experts estimated that between 250,000 to 500,000 people died from influenza or influenza-related illnesses.

I cannot describe the feeling of contentment that was with me at that time.
我无法描述当时我满足的感觉~Io,i;IH97ptlgqLGOX。
At that time we were students.
那会儿我们还是学生fbw4c,mgS.8yIwx!t。 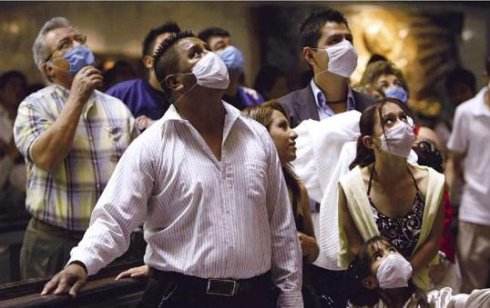