Saudi Arabia Changes Its Story of Khashoggi Disappearance
CNN television has reported about a new video linked to the disappearance and suspected killing of Jamal Khashoggi.
The video appears to show a man wearing Khashoggi's clothes leaving Saudi diplomatic offices on October 2 with another person. CNN said Turkish law enforcement cameras recorded the video.
CNN said the video suggests someone was pretending to be Khashoggi, possibly to hide the killing. Turkish state-run broadcaster TRT also reported that a man wearing Khashoggi's clothes left the consulate building.
Jamal Khashoggi entered the consulate on October 2nd and has not been seen in public since.
Saudi Arabian officials have changed their explanation about Khashoggi's disappearance several times.
At first, the Saudi government said that he left the consulate in Istanbul and that officials did not know where he was. Then, it said that Khashoggi died in a fight inside the consulate. Most recently, they have said that Khoshoggi choked to death while being prevented from leaving the consulate to call for help.
Turkish leader warns of more details
Turkish President Recep Tayyip Erdogan has said he will give details of the case in a speech to parliament on Tuesday.
He told supporters in Istanbul Sunday, "We are looking for justice here..." and that the truth would be told.
In addition, Erdogan spoke to American President Donald Trump by telephone on Sunday. Turkish state-run media said the two agreed that the Khashoggi case needed to be "cleared up."
Turkish officials say they have sound recordings and video evidence of Khashoggi being tortured and killed inside the Saudi consulate.
On Sunday, Saudi Arabia's Foreign Minister Adel al-Jubeir said that Khashoggi died in, what he called, a "rogue operation."
Al-Jubeir offered sympathies to Khashoggi's family. He said that any attempt to "cover up" wrongdoing was "unacceptable in any government." The foreign minister also denied reports that powerful Crown Prince Mohammed bin Salman was involved.
Saudi Arabia says Crown Prince Mohammed bin Salman expressed his sympathy to Khashoggi's son on Monday. They spoke by telephone.
Saudi Arabia also says it has dismissed five officials linked to the suspected death and have arrested 18 others. It says an investigation is being carried out.
News reports have said 15 Saudi agents were involved in the operation. Some people question how a team of 15 Saudi agents could travel to Istanbul without the crown prince's knowledge.
Some U.S. lawmakers, including members of the president's Republican Party, have expressed concern about the apparent killing. They are demanding punishment for Saudi Arabia.
President Trump has said Saudi Arabia could be punished. But, he has said he is unwilling to cancel a $110-billion arms deal reached last year with the Kingdom.
Khashoggi's family has links to the Saudi Royal family. His father was a Turk who served as the personal doctor to King Abdulaziz Al Saud the founder of Saudi Arabia. Khashoggi has been a reporter since the 1980s.
Most recently, he wrote opinion pieces for the Washington Post newspaper. Khashoggi has been critical of the Saudi government and has called for democratic reforms in countries across the Middle East.
Khashoggi was at the consulate to get documents linked to his planned marriage to Turkish citizen Hatice Cengiz. She stood near the door of the consulate for hours waiting for him. When he did not appear, she reported his disappearance.
I'm Mario Ritter.
And I'm Caty Weaver.

Both sides will strengthen cooperation in judicial and law enforcement.
双方将加强司法和执法领域的合作0XFrPi-(87m。

The night he called for me the last time, I cried myself to sleep.
那天晚上他最后一次打电话给我，我哭着睡着了X]Bdw4toSkM。

Now he holds the office of Foreign Minister.
他现在担任外交部长职务8U5bI=lRT!,p1。

Have you found the book you have been looking for?
你找的书找着了吗？

5.He said that any attempt to "cover up" wrongdoing was "unacceptable in any government."

6.Most recently, they have said that Khoshoggi choked to death while being prevented from leaving the consulate to call for help.

If I were in the lion’s cage , I’d call for help.
如果我在狮子笼里，我会大呼救命uzox##4Evt。
This morning on my way to school, I was riding when I heard a call for help.
今天早晨，在上学的路上，我正骑着车突然听到呼救声0i=0Yq[j2RS)。 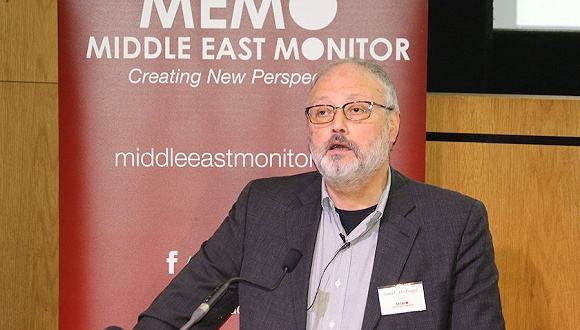