US Ambassador to United Nations Steps Down
United States President Donald Trump and U.N. Ambassador Nikki Haley have announced that Haley will leave her position at the end of the year.
Trump called Haley a "very special" person as he made the announcement with Haley by his side in the Oval Office.
The president said that Haley told him six months ago that she might want to take some time off. He added, "She's done a fantastic job, and we've done a fantastic job together."
Haley thanked the president and called her service as U.N. ambassador "an honor of a lifetime."
Haley has often been mentioned as a candidate for president. However, she said, "No I'm not running in 2020." She added that she plans to support Trump for re-election.
At the U.N., Haley led Trump's policy to fight against anti-American and anti-Israel actions by the international organization. She announced that the U.S. would be "taking names" of countries that voted against its decision to recognize Jerusalem as Israel's capital.
Last month, Haley wrote an article in The Washington Post discussing her service in the Trump administration. She wrote, "I proudly serve in this administration, and I enthusiastically support most of its decisions and the direction it is taking the country. But I don't agree with the president on everything."
Haley is the daughter of immigrants from India. She criticized candidate Trump for his position on immigrants during the 2016 presidential campaign. Trump replied, "The people of South Carolina are embarrassed by Nikki Haley."
As the first female governor of South Carolina, Haley supported the removal of the Confederate battle flag at the state Capitol building. Some considered the flag a symbol of racial oppression.
Trump said he was considering many candidates for Haley's job and that a successor would be named in two to three weeks.
I'm Jonathan Evans.

Some fear he is too thin-skinned to survive the rough-and-tumble of a presidential campaign.
有人担心他脸皮太薄，经受不住总统选举的激烈竞争AfjAV;PC,*MRH#*xQ。

I am embarrassed by my complete ignorance of history.
我对历史一无所知，这让我很难堪X@*%^Fe5@Dd。

You know, I stand an honor of my country.
你知道，我为我的祖国感到骄傲eOvy67vUItIb。

5.The president said that Haley told him six months ago that she might want to take some time off.

take some time off 休假

6.United States President Donald Trump and U.N. Ambassador Nikki Haley have announced that Haley will leave her position at the end of the year. 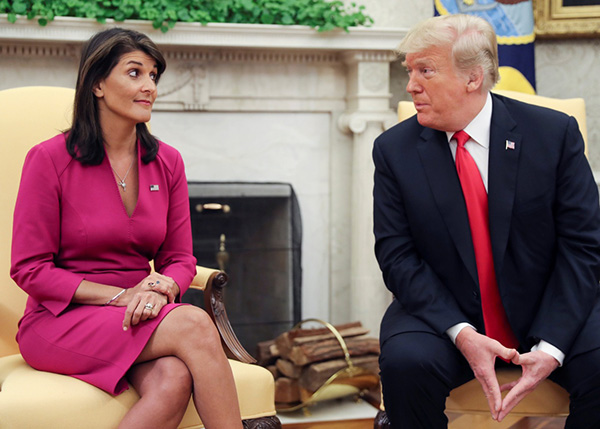