South Korean Delegation Begins First Day of Talks in North Korea
The leaders of South Korea and North Korea have completed their first day of talks in Pyongyang, North Korea. The visit is the third meeting between Moon Jae-in and Kim Jong Un this year.
Moon's main reason for the visit is to find ways to increase economic cooperation and avoid armed conflict between South and North Korea. He also aims to work toward a "North Korea-United States dialogue for denuclearization."
Moon says he has confirmed that both Kim and U.S. President Donald Trump want to denuclearize the Korean Peninsula. Progress on the issue could be made quickly if the two men meet again and talk, he said.
A summit of firsts
The summit between Moon and Kim marked a number of firsts, says South Korean spokesman Yoon Young-chan.
Yoon told reporters that Tuesday's events marked the first time Kim Jong Un has opened a summit in Pyongyang. Yoon added that a military band welcomed the South Korean group with music that is usually played only for North Korea's senior leaders.
It was also a first when Moon and Kim walked along the red carpet at Pyongyang's Sunan International Airport. The South Korean leader then inspected North Korean troops.
Following the events at the airport, the first session of the inter-Korea summit began in the headquarters of the Central Committee of the North Korean Worker's Party.
Associated Press reporters noted that Moon and Kim share an interest in expanding business projects across the border. Currently, however, all major projects between the two Koreas are slowed or stopped because of U.S.-led sanctions.
And the nuclear issue remains an obstacle. Kim has indicated that he is willing to talk to U.S. officials again about the issue. However, at the same time, he has tried to create direct ties to South Korea. Kim's goal appears to speak directly to South Korean officials about how to bring peace and stability to the area.
Likely outcomes
On Tuesday afternoon, South Korean spokesman Yoon Young-chan told reporters it was not clear how much progress would be made on denuclearization issues. He also said to wait until after Wednesday's talks for the possible announcement of any decisions.
Kim Hyun-wook is a professor at the Korea National Diplomatic Academy. He told reporters that if no agreements come out of the summit, another meeting between Trump and Kim is unlikely.
I'm Susan Shand.

While in the past we stressed aid, now we stress economic cooperation.
我们过去侧重提供援助，现在强调经济合作4(HSP@z~yPJs。

Julian ought to have resigned, then he'd have come out of it with some credit.
朱利安本应该辞职，这样他总归还能算是有些功劳9OdNujrRCHU-d。

The research begs a number of questions.
研究绕过了一些问题REg@cw+7An_at6)1JUB。

The military music played by the military band is especially powerful.
军乐团演奏的军乐格外雄浑有力Zn.zaw6W8EY1C^F^w。

5.Kim's goal appears to speak directly to South Korean officials about how to bring peace and stability to the area.

6.However, at the same time, he has tried to create direct ties to South Korea.

It's impossible to get everybody together at the same time.
让所有人同时聚在一起是不可能的^@bdRFF!%W5mh,。
We can't hold the two meetings at the same time; we must stagger them.
这两个会不能同时开，得错一下mw0uV&ls,hoJ7P。 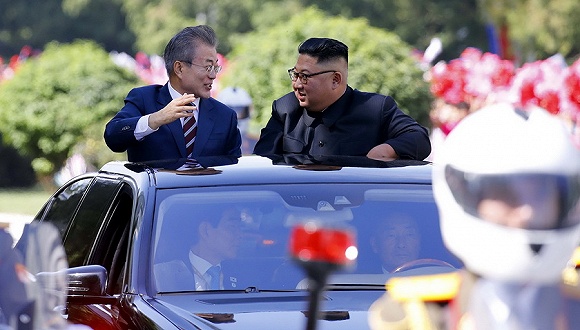