S. Korea Says Korean Leaders to Meet on Denuclearization
A South Korean official says North Korea's leader commented that he is committed to denuclearization of the Korean Peninsula.
National security advisor Chung Eui-yong also said that the leaders of North and South Korea are to meet in the capital of North Korea, Pyongyang, from September 18th to the 20th. Chung made the announcement Thursday in Seoul.
One day earlier, Chung led a delegation to the North Korean capital to confirm details of the planned meeting. He also met with North Korean leader Kim Jong Un.
Kim said to be frustrated
Thursday, Chung told reporters about his talks with Kim. He said Kim confirmed his commitment to the complete denuclearization of the Korean Peninsula. The official added that Kim also promised to cooperate with both South Korea and the United States.
Chung said that Kim's faith in U.S. President Donald Trump is unchanged since their summit in Singapore on June 12.
News of the comment brought a statement of thanks from Trump on Twitter.
Chung noted that Kim said he wishes for North Korea and the U.S. to end their hostilities by the end of Trump's first term in office in 2021.
The Associated Press reports that Chung said Kim expressed frustration over the international community's reaction to measures taken by the North.
Several measures were meant to show the North's willingness to end its banned weapons programs. These include disabling part of the Sohae missile launch area and destruction of tunnels used to test nuclear weapons. Last month, North Korea also returned 55 sets of human remains to the United States. They are believed to be those of American soldiers who died in the Korean War.
Kim said he would take "more active" measures toward denuclearization if his moves were met with similar measures, Chung said.
The South Korean delegation came to Pyongyang as U.S.-North Korean diplomatic efforts appeared to have cooled. Last month, Trump cancelled a planned trip by U.S. Secretary of State Mike Pompeo to Pyongyang. He said not enough progress had been made toward denuclearization.
Critics of the most recent negotiation efforts say North Korea has, in the past, said it would end its nuclear program. They say the North has often sought to gain economic aid and then failed to keep its promises.
China's part in negotiations
The most recent developments come as North Korea prepares to mark its 70th anniversary on September 9. Representatives of North Korea's close ally, China, are expected to be at the special ceremony.
Chinese parliamentary chief Li Zhanshu is set to attend, not President Xi Jinping. Li is the third ranking member in China's Communist Party.
Stephen Noerper is a senior director at the Korea Society in New York City.
He said, while China has listened to North Korea's concerns, the country has reduced trade with its neighbor and placed pressure on it. North Korea continues to face strong United Nations restrictions because of its banned nuclear and missile program.
President Trump has called on China to do more to get North Korea to take part in talks on denuclearization.
Noerper said South Korea is acting as a moderator between the U.S. and the North. He said this position is risky for South Korean President Moon Jae-in. Moon's popularity at home has fallen since his earlier meetings with Kim and the Trump-Kim summit.
Moon spoke to his aides Thursday about the next meeting with Kim. He said the talks will speed up negotiations between the U.S. and North Korea on the issue of denuclearization.
The newly announced summit between the Korean leaders would come just before the yearly gathering of world leaders at the United Nations in New York.
I'm Mario Ritter.

Your national security advisor has just been executed.
你的国家安全顾问被处死qdrfL_ZnCd6~Xx4n7W。

He's much too peremptory to cooperate with others.
他太蛮横，没法跟人合作WZWUI8q+|IC*p。

A trained dog can act as a guide to a blind person.
经过训练的狗能担任盲人的向导0s8F+EAAUsq@8+9A。

5.Chung noted that Kim said he wishes for North Korea and the U.S. to end their hostilities by the end of Trump's first term in office in 2021.

The president said he'd made no firm decision on whether he would run for a second term in office.
总统说他还没有下定决心是否竞选连任oC5_yNCDXdOG+vvw。
The events to mark the President's ten years in office went ahead as planned.
总统任职10周年的庆祝活动按计划进行+42AY+pwEgIw。

6.President Trump has called on China to do more to get North Korea to take part in talks on denuclearization. 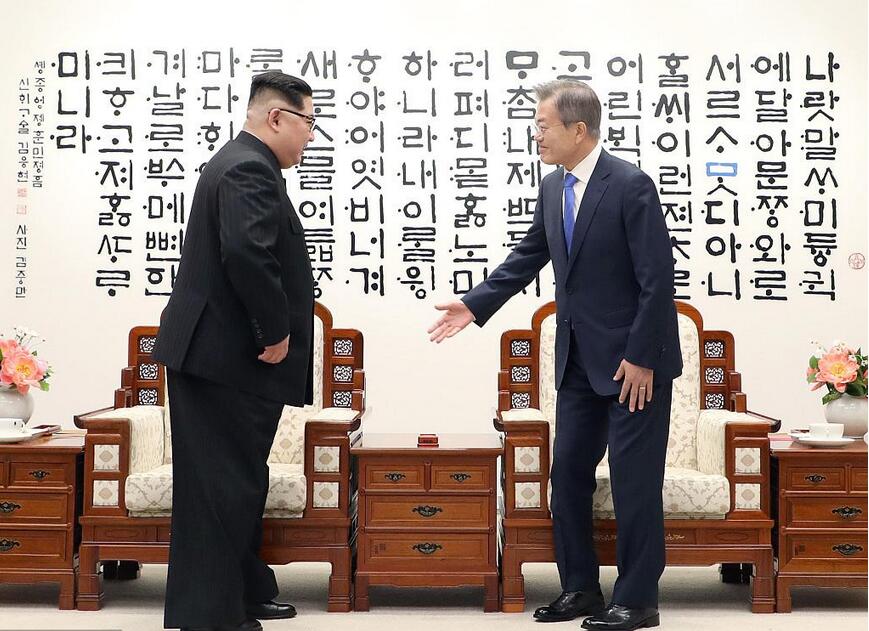