New Video Shows Amazon Tribe with No Contact to Outside World

Video has been released for the first time showing an Amazon tribe in Brazil with no known contact to the outside world.

The video, shot by a drone, provides the first-ever images of 16 tribe members walking through their living area in the jungle.

The footage was recently released by Brazil's government agency for indigenous affairs, known as Funai. The agency is responsible for identifying areas where indigenous populations live, and attempting to protect their communities and land from invasion by outsiders.

Funai said it captured the drone shots during an operation last year to observe isolated communities. The observations took place in the Javari Valley, an indigenous territory in the southwestern part of the Brazilian state of Amazonas.

The group said it waited until now to release the footage to protect its research activities.

In the footage, several members of the isolated tribe can be seen walking through a jungle camp, as well as a deforested area that seems to include crops. One of the tribe members appears to be carrying a bow and arrow.

At least 11 other isolated groups have been confirmed to live in surrounding areas - more than anywhere else in Brazil.

The agency has been studying the community seen in the new images for years, but this was the first time it was able to catch the tribe on camera.

Funai's president Wallace Bastos says the video footage can be an important tool for teaching about such communities. "These images have the power to make society and the government reflect on the importance of protecting these groups," he said.

Bruno Pereira helps run Funai's research activities in the area. He said such documentations can also help researchers learn more about the cultures of indigenous populations.

While the agency has not yet identified the name of the tribe, it does have some guesses about its ethnicity and what language it speaks. "The more we know about isolated communities' way of living, the more equipped we are to protect them," Pereira said.

Overall, Funai has registered 107 isolated tribes in Brazil - Latin America's largest nation. While the agency sometimes takes photos and videos, it has not been making contact with the tribes for more than 30 years.

Pereira told the Associated Press these communities know of the cities and farms around them. But they often choose to isolate themselves due to bad experiences with the outside world.

Such contacts can be dangerous, sometimes resulting in deadly fighting that can destroy tribes. Last year, a group of illegal gold miners were accused of killing 10 people in an isolated community.

"If they wanted contact with the outside world, they would seek out ways to communicate with us," Pereira said.

Children seek out regularities and rules in acquiring language.

You should contact with the professor before you leave for your vacation.

5.The agency is responsible for identifying areas where indigenous populations live, and attempting to protect their communities and land from invasion by outsiders.

6.In the footage, several members of the isolated tribe can be seen walking through a jungle camp, as well as a deforested area that seems to include crops. 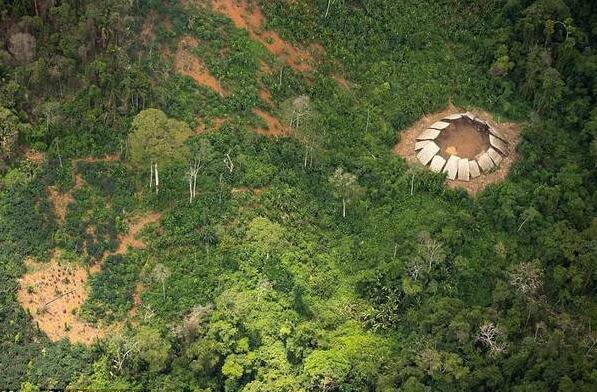