Candidate Likely to Become First Muslim Female in US Congress

Rashida Tlaib is one step closer to becoming the first Muslim female member of the United States Congress.

With almost all ballots counted, Tlaib led all candidates for the Democratic Party's nomination in Michigan's 13th Congressional District. Tuesday's primary election decides who will be on the ballot in November's general election.

However, since there is no Republican or other candidates, Tlaib will be unopposed in November.

Ahlam Jbara lives in Chicago, six hours away by car from the Michigan congressional district in the city of Detroit. But she thought the Tlaib campaign was so important that she traveled all that way to be part of it. She said she identified closely with the candidate.

Across the country, about 90 Muslim Americans are on ballots for elected office during this year's elections. Many are running as Democrats hoping to become part of a so called "blue wave" for the party seeking to gain control of Congress.

She has gained attention around the country, especially from Muslim American women who see her candidacy as a door opening.

"She's turning out first time voters, not just youth, but others who are the first time voters who've been American citizens for a long time, even those who are born here but have never voted before because they didn't have faith in their government."

Tlaib said she was not well recognized by voters when she started. But, she said her campaign knocked on more than 50,000 doors.

The race was close until the end. Early Wednesday morning, Tlaib heard the news that she had received more votes than Detroit City Council President Brenda Jones. She then thanked everyone who had helped her and also her family.

"I want to thank my Mom, who is from a small village in the West Bank..." she said.

A former Michigan state lawmaker, Tlaib is expected to take the seat in the House of Representatives once held by John Conyers. The long-time lawmaker stepped down in December for health reasons as he faced accusations of sexual wrongdoing.

Tlaib is not the only Muslim American woman running who could serve in Congress. Somali American lawmaker Ilhan Omar is running in a primary election in Minnesota on August 14. She could join Tlaib in the next Congress.

The candidate's brain trust is gathering this weekend to plan strategy for the primary election.

2.made a big effort to 付出巨大努力

Tom made a big effort to move the rock.

He said he would seek to unify the Conservative Party and win the next general election.

Many would prefer to see him step down in favour of a younger man.

5.Rashida Tlaib is one step closer to becoming the first Muslim female member of the United States Congress.

one step closer to 离...更近一步

Now you're one step closer to getting out of here.

Every time you fail brings you one step closer to your goal.

6.Even those who are born here but have never voted before because they didn't have faith in their government."

We have faith in her ability to handle this affair.

It's good to have faith in people. 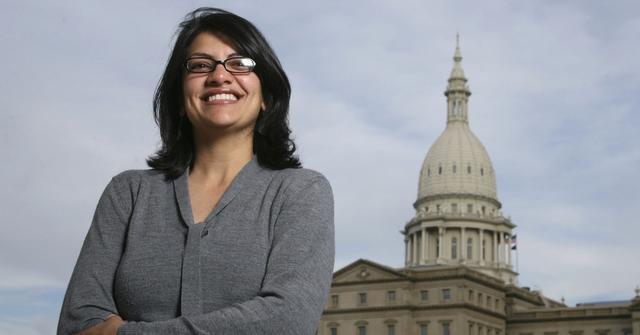