How far would you go to make a good impression at a new job?

A college student in Alabama walked 32 kilometers in the dark to get to his new job.

The story begins with Walter Carr's car breaking down the night before starting a new job at Bellhops, a furniture moving company.

Carr was unable to find a ride. So, he figured out how long it would take to walk from his house to the job in Pelham -- 32 kilometers away. He left at midnight so that he could make it the customer's house by 8:00 am the next morning.

Pelham police saw him walking along a highway at 4:00 am. So, they stopped to see if he needed help. After hearing his story, they took him to a restaurant for breakfast and then to a church where he could safely wait until 8:00 am.

The police then took Carr to the home of customer Jenny Lamey. Lamey said that even though Carr had just walked the entire night, he refused her offer to rest. He just wanted to start working. While he worked, he talked with the customer, telling her how much he liked her kitchen.

Reporter Carol Robinson of the Birmingham News wrote that Carr also shared another story with his customer. He told Lamey that he and his mother moved from New Orleans, Louisiana to Birmingham, Alabama after losing their home in Hurricane Katrina. Katrina was an extremely destructive and deadly hurricane that hit the Gulf Coast of the U.S. in 2005.

Jenny Lamey later wrote this on Facebook: "I just can't tell you how touched I was by Walter and his journey. He is humble and kind and cheerful and he has big dreams! He is hardworking and tough."

She then started a GoFundMe page to help Walter with money to get his car fixed. When the CEO of Bellhops, Luke Marklin, learned of Carr's story, he drove from Tennessee to Alabama to give Walter his own 2014 Ford Escape.

Walter Carr's story touched many others around the United States. Within a few days, people gave over $73,000 to his GoFundMe page.

Carr has decided to give a part of the donations to the Birmingham Education Foundation. And he has received more offers for jobs and scholarships for schools.

A thousand-li journey begins with the first step.

Haven't you figured out what he meant yet?

Now and again I saw him walking along broadway.

Even though I'm quite a reserved person, I like meeting people.

5.The story begins with Walter Carr's car breaking down the night before starting a new job at Bellhops, a furniture moving company.

He's scared stiff of the relationship breaking down.

My car is useless, it is always breaking down.

6.How far would you go to make a good impression at a new job?

If you want to make a good impression, it is best to avoid these habits. 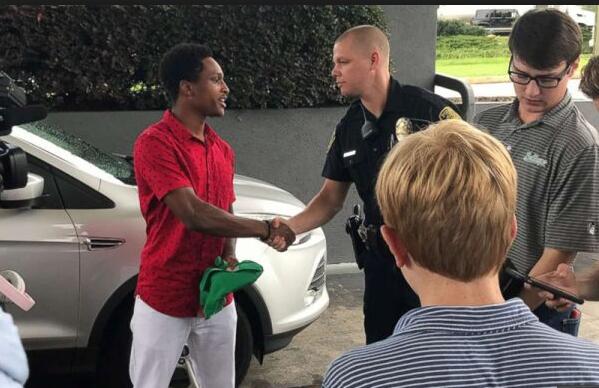