US Navy Gives Women Permission to Let their Hair Down

The United States Navy is giving female service members more choices with the shape and look of their hair.

The Navy has approved changes to let servicewomen wear a ponytail or have other hairstyles. The new rules – announced during a Facebook Live event – went into effect on Wednesday.

The Navy has long barred females from letting their hair down, including tying long hair in a ponytail.

The new rules came about after several servicewomen suggested changes to the hairstyle policy.

A group of Navy women was asked to consider different proposals, some of which were eventually approved by military officials.

Captain Thurraya Kent was a member of this working group. She said they supported an expansion of approved hairstyles to make it easier for women to carry out their duties. It would also prevent the need for women to keep processing their hair with chemicals.

Female service members will also now be permitted to wear what the Navy describes as lock hairstyles -- pieces of hair that are tightly pulled into rope-like strands.

Kent has served in the Navy for nearly 26 years. She noted that her hair has been an issue throughout her military service. Kent told the Associated Press that she spent a lot of time deciding how to wear it when deployed. She said it could also be a problem trying to make sure she did not violate policies after doing an exercise or other non-work-related activities.

Kent said she was pleased that Navy leaders listened to the suggestions and tried to understand the needs of female sailors.

At the U.S. Naval War College in Rhode Island, some women said they looked forward to moving away from a bun hairstyle, which is sometimes too large for a helmet.

Legalman First Class Tamatha Schulmerich told the Associated Press she has been forced to keep her hair in a bun because it goes down to her lower back. She said it was especially difficult when she had to wear a flight helmet.

Lieutenant Commander Jess Cameron said that while the hairstyle changes might seem like a small thing, she thinks they send a larger message.

"I think it's a step forward," she told the AP. "They're getting more female feedback in the service, and updating what I think are somewhat antiquated guidelines that maybe no longer serve their purpose in today's society, today's military," she said.

Navy officials say hairstyle rules are important for safety reasons and to make sure all service members present the same look. Even though the new rules permit a ponytail most of the time, the hairstyle will still be banned when women are working around heavy machinery.

Make sure you are strapped in very well, or else you will fall out.

As we pulled into the driveway, she let us have it.

The heavy machinery, imported from England, had to be hauled over the mountains in ox carts.

5.The new rules – announced during a Facebook Live event – went into effect on Wednesday.

The act was passed by Congress and went into effect in july, 1980.

This year a new media law went into effect in China.

When one is in difficulty, all step forward to help.

In this land of mythic tales, it's time for some new heroes to step forward. 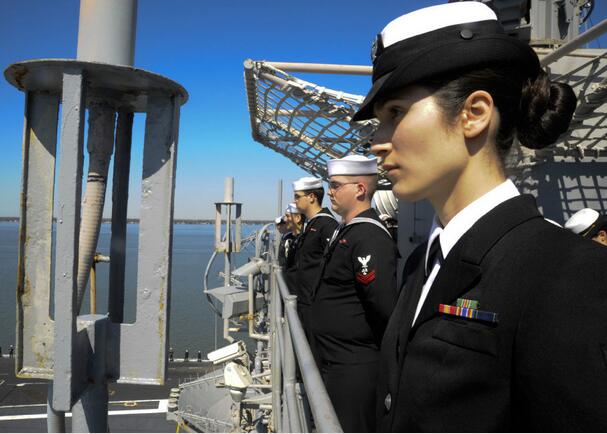