A Thai government official says all 12 boys and their coach are doing well after their rescue from the Tham Luang cave.

Thongchai Lertwilairatanapong is a Thai public health inspector. He told the Associated Press Wednesday that the boys lost about two kilograms of weight during their time in the cave. He said they survived by drinking clean water dripping into the cave.

Four boys were rescued Sunday, and another four were guided to safety on Monday. The remaining four boys and their coach were pulled out Tuesday.

The first photographs of the boys recovering in a Chiang Rai hospital were released Wednesday. It showed that many of them appeared to be in good condition. Some made the two-finger victory sign from their hospital beds. The photos also showed parents of the boys looking at their children through a glass window.

The parents have reportedly only been able to see their children through windows as they recover. All 12 boys are being kept away from family members to prevent them from catching infections. Three of the boys are being treated for minor lung infections.

Chaiwetch Thanapaisal is director of Chiang Rai Prachanukroh Hospital. He said, "Don't need to worry about their physical health and even more so for their mental health."

Despite their mostly good health, all the boys need to be observed in the hospital for seven days and then rest at home for another 30 days.

Thai Navy SEALs also posted photos and a video of some of their operations in the cave on their Facebook page Wednesday.

Narongsak Osatanakorn is the official who oversaw the rescue operation. He praised the cooperation between Thai and international rescuers. He said, "The situation went beyond just being a rescue mission and became a symbol of unity among man."

He added that everyone worked together without concerns about race or religion, as the goal was to save the young football team.

None of the 12 boys had ever been diving and some did not know how to swim. Two divers were helping each one make his way through very small passages filled with water. It took the divers about eight hours to get into the cave, reach the boys and bring them back out.

The fund is earmarked for public health services.

Some Americans have expressed concerns about the program.

He was eager to get into politics.

The air rescue operation has now been scaled down.

5.All 12 boys are being kept away from family members to prevent them from catching infections.

6.He ran out of air while trying to swim out of the cave.

They ran out of fuel.

The builders ran out of materials. 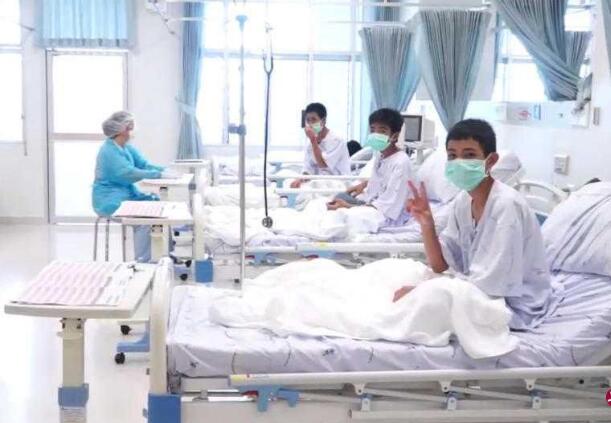