All 12 Boys, Soccer Coach Rescued from Flooded Cave in Thailand

Thai officials say all 12 members of a boys' soccer team and their coach have been rescued from deep inside a flooded cave in northern Thailand.

A Thai Navy SEAL force announced that the remaining four boys and the coach were rescued on Tuesday. Thai and foreign divers safely led the other eight youngsters out of the cave earlier in the week.

"We are not sure if this is a miracle, a science, or what. All 13 Wild Boars are now out of the cave. Everyone is safe," the SEALs wrote on Facebook. The Wild Boars is the team's name.

The acting governor of Chiang Rai state, Narongsak Osottanakorn, led the rescue operation. He said the efforts on Tuesday began just after 10 in the morning local time and involved 19 divers.

The 12 boys and the coach got trapped on June 23 when they set out to explore the Tham Luang cave after a soccer workout. British divers found them in a partly flooded passage several kilometers inside the cave on July 2.

Monsoon rains have started falling again in Thailand. The rainfall causes water levels inside the cave to rise.

Experts warned it was extremely risky to dive the youngsters out of the cave. None of the boys had ever dived before. Some of them do not even know how to swim. But a short period of less heavy rainfall this week made the rescue mission possible.

A team of Thai and international divers guided the boys and their coach out through a nearly four kilometer long passageway. Two divers helped each one make his way through dark, very narrow passages, some of which are filled with dirty water. It took the divers about eight hours to get into the cave, reach the boys, and bring them back out.

One volunteer, former Thai Navy SEAL Saman Gunan, died last Friday while placing air tanks along the escape path. He ran out of air while trying to swim out of the cave.

Condition of the boys

Thai Health Secretary Jedsada Chokdumrongsuk told reporters earlier on Tuesday that two of the first eight rescued boys had lung infections. He added that all of them were generally healthy and in good spirits, thanks to their "high immunity" from playing football.

Jesada said the boys are being kept away from family members to prevent them from getting an infection. He said they would likely be in the hospital for at least a week.

He also told reporters that the first four boys who were rescued are now able to eat normal food. But he added they cannot yet have the spicy treats that many Thais like to eat.

The air rescue operation has now been scaled down.

He was eager to get into politics.

Most deaths are caused by bacterial lung infections that move in after the virus.

Failing a heavy rainfall soon, the drought will become serious.

5.But a short period of less heavy rainfall this week made the rescue mission possible.

a short period of 短时间内

How could you do it in such a short period of time?

Eggshells are created when this happens many times over within a short period of time.

6.The 12 boys and the coach got trapped on June 23 when they set out to explore the Tham Luang cave after a soccer workout.

She has set out to seduce Stephen.

The state announced a clear-cut policy and set out to carry it through. 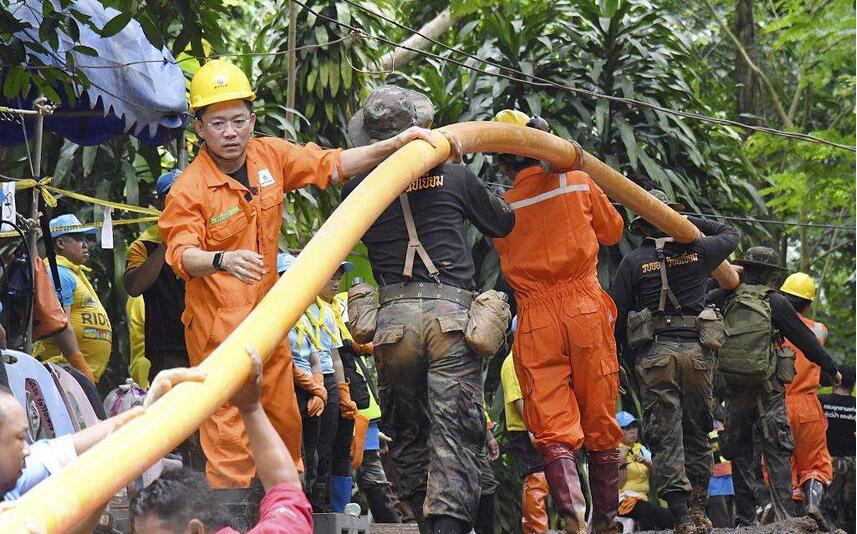