Only three mothers have ever won a Grand Slam tennis title in the 50 years of what is known as the "Open era" of competition. They are Kim Clijsters of Belgium and Australians Evonne Goolagong and Margaret Court.

Serena Williams is looking like she could become the fourth.

The 36-year-old American needed just 62 minutes Monday to reach the quarterfinal round of the Wimbledon tennis tournament.

She defeated Evgeniya Rodina of Russia, who also is a mother.

After her win against Rodina, Williams told reporters, "I knew we were both moms, and I'm not sure how often that happens, if ever. So it's really cool. You can be a mom, you can still play tennis and you can still be great."

Williams has won seven Wimbledon singles titles and 23 Grand Slam singles titles overall. But a win here would be her first title since becoming a mother. She gave birth to her daughter, Alexis Olympia, in September.

Williams returned to Grand Slam competition earlier this year at the French Open, but she withdrew because of an injury. Coming into Wimbledon, she was not ranked among the top 150 female players because she missed more than a full season of competition, first while pregnant and then after giving birth.

However, the All England Club at Wimbledon seeded her 25th, choosing to look at her past successes instead of her recent lack of competitions. Williams said she hopes other women who return to professional tennis after having a child receive the same treatment.

"It will be really nice for these women to take a year off, and have the most amazing thing in the world, then come back to their job and not have to start from the bottom..." Williams said of the decision.

Motherhood is an important part of who Williams is. She speaks openly about her health problems during childbirth, the joys of bringing her daughter with her to competitions and the difficulty of dividing her time between family and sport.

Over the weekend, she wrote on Twitter that she missed seeing her 10-month-old daughter walk for the first time.

"She took her first steps," Williams wrote. "I was training and missed it. I cried."

The tweet – and the discussion it started – went viral. People around the world answered her with supportive messages.

Twitter user David Jones wrote, "When your daughter is a little older she'll know her mother is 1) the greatest tennis player of all time and 2) the woman who helped others return to the game after childbirth with a protected ranking and a career they don't have to abandon. I hope you win it for her next Saturday."

Williams must win two more matches to make it to the Wimbledon final on Saturday. She next faces Camila Giorgi of Italy. The two play Tuesday at 13:15 UTC.

No professionals may participate in the amateur tennis tournament.

I begged him to come back to England with me.

It's not enough if you want to win against Liverpool.

He took off at once and headed back to the motel.

5.Over the weekend, she wrote on Twitter that she missed seeing her 10-month-old daughter walk for the first time.

for the first time 首次；第一次

Streams had run dry for the first time in memory.

For the first time in my career, I was failing.

6.She gave birth to her daughter, Alexis Olympia, in September.

She gave birth to a girl last night. 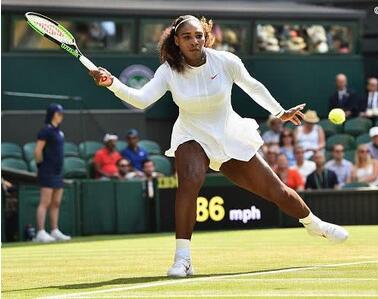