Severe flooding and landslides have killed at least 100 people in southwestern Japan.

Rescuers searched for survivors in flooded areas and landslides after several days of heavy rain. Officials said dozens of people were missing.

The severe rain caused rivers to overflow, in some cases covering whole towns. Some people escaped the water by climbing onto the top of their homes while waiting to be rescued by helicopter.

Parts of southwestern Japan had up to 10 centimeters of rain per hour, the highest level in decades. In some areas, hills collapsed under the weight of water, causing deadly landslides that crushed homes and took out roads.

Japanese officials said more than 73,000 emergency workers and troops were involved in search and rescue efforts. Thousands of homes were without clean water and electricity in the city of Hiroshima and other hard-hit areas.

The rain finally lifted on Monday. It was replaced by sunny, hot conditions. Many people lined up to receive water in temperatures reaching 34 degrees Celsius.

One of those lining up was Yumeko Matsui, whose home in Hiroshima had been without water since Saturday.

"We cannot take baths, the toilet doesn't work and our food stockpile is running low," the 23-year-old school worker said. She added that bottled water and tea were sold out in local stores.

Seiji Toda told Japan's TBS television he was shocked and felt helpless when he saw that his restaurant in Hiroshima had been destroyed by a landslide. "I have never seen anything like this," Toda said, standing outside the eatery he opened 40 years ago.

Even with the break in rain, officials warned of the possibility of sudden showers, as well as new landslides in the wettest areas.

They searched for a spot where they could sit on the floor.

He's starred in dozens of films.

5.Many people lined up to receive water in temperatures reaching 34 degrees Celsius.

Thousands lined up to register to vote.

We lined up to buy tickets for the international football match.

6.Even with the break in rain, officials warned of the possibility of sudden showers, as well as new landslides in the wettest areas. 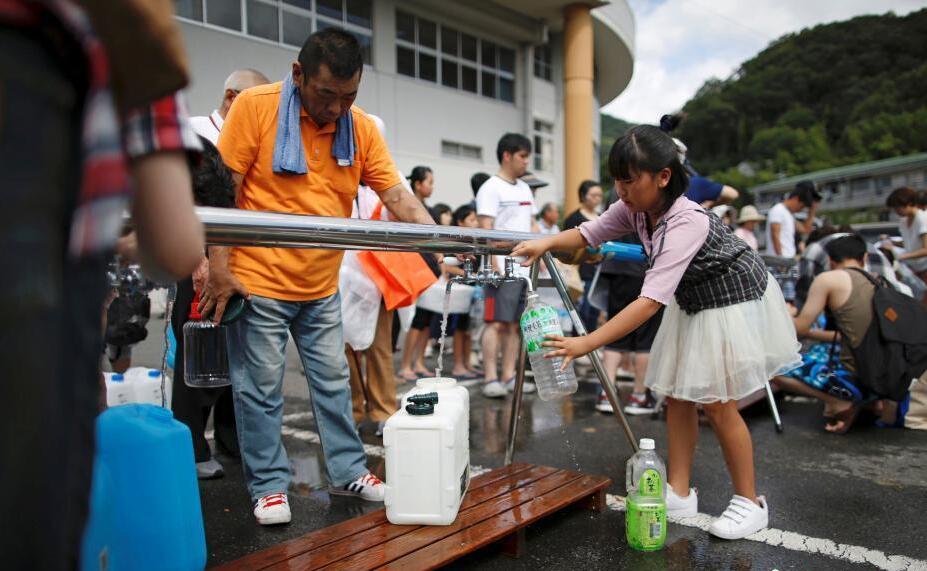