Benefits of Eating Together

From VOA Learning English, this is the Health & Lifestyle report.

We all need to eat. So, meals could be a chance to stop what we're doing and spend time with the people in our lives.

But sometimes they are not.

It does not matter if a person is married or single; is a parent or not; is working or retired. From time to time, we all eat last-minute meals alone. And, of course, eating alone at home or at a restaurant can be a very satisfying experience.

However, could eating too many meals alone be bad for our health or affect our future success?

Several studies show that it might for some people.

A recent study from a team of South Korean researchers suggests that frequently eating alone may lead to poor eating habits and poor food choices.

Specifically, the study found that men who ate alone more than twice a week had a greater risk of developing high blood pressure, high cholesterol and diabetes.

Benefits of family dinners on children and teenagers

For children, eating with their families is not only about preventing bad outcomes – it is also about developing good ones.

Several studies have looked at the long-term effects eating with families has on a child. Experts say that these studies do not seem to prove a cause-and-effect relationship. However, they do suggest a strong correlation, or link.

In 2014, the Organization for Economic Cooperation and Development (OECD) looked at data from nearly three-quarters of the world's countries. Among its findings was the fact that students who shared a main meal with their families were less likely to skip school.

Children who eat a main meal with their families are also less likely to abuse drugs and alcohol.

That was a finding of a study by the National Center on Addiction and Substance Abuse (CASA) at Columbia University in New York. The 2012 CASA report found that "family dinners were strongly linked to teen substance use prevention."

In the report, titled "The Importance of Family Dinners (VIII)," researchers say that "teens who have frequent family dinners are more likely to say their parents know a lot about what's...going on in their lives ..."

They also claim that when teens say they feel closer to their parents, they are less likely to use drugs and alcohol.

Another study from the University of Montreal found that children who ate with their families experience long-term physical and mental health benefits. These children were physically in better shape and drank fewer sugary soft drinks. These children also seemed to have better social skills and self-reported that they were less aggressive.

One of the researchers involved in this study is a professor of psychoeducation at the university.

Linda Pagani says that there is "a handful of research suggesting a positive link between eating family meals together frequently and child and adolescent health."

Pagani says that mealtimes shared with parents "likely provide young children with firsthand social interaction, discussions of social issues and day-to-day concerns." She adds that they may likely help the child have better communications skills with others.

Ways to eat together more

If you find too many of your mealtimes to be lonely events, experts at the Mental Health Foundation in the U.K. suggest making small changes.

Its website says to make room for at least one shared meal a week. And keep it simple. Even if dinner is a salad and a sandwich, it is still time for a family to be together.

If mornings are less busy than evenings, start by making breakfast your shared meal.

If you live alone, reach out to those in your social circle or neighborhood. Once a month potluck dinners where everyone brings a dish could be an easy way to start.

If you work in an office, step out with a co-worker for a bite to eat every once in a while, instead of eating at your desk every day.

Or you could simply schedule time in your week to share a cup of coffee or tea with a friend.

And that's the Health & Lifestyle report.

He agreed to skip school and go with the boys to the beach.

Instead of tea or coffee, drink water to quench your thirst

Oxford's social circle was far too liberal for her taste.

4.From time to time 不时；偶尔

Her daughters visited him from time to time when he was ill.

5.Linda Pagani says that there is "a handful of research suggesting a positive link between eating family meals together frequently and child and adolescent health."

Only a handful of firms offer share option schemes to all their employees.

A handful of onlookers stand in the field watching.

6.If you work in an office, step out with a co-worker for a bite to eat every once in a while, instead of eating at your desk every day.

once in a while 偶尔；有时

He comes to our room for a chat every once in a while.

I guess everyone broods over things once in a while. 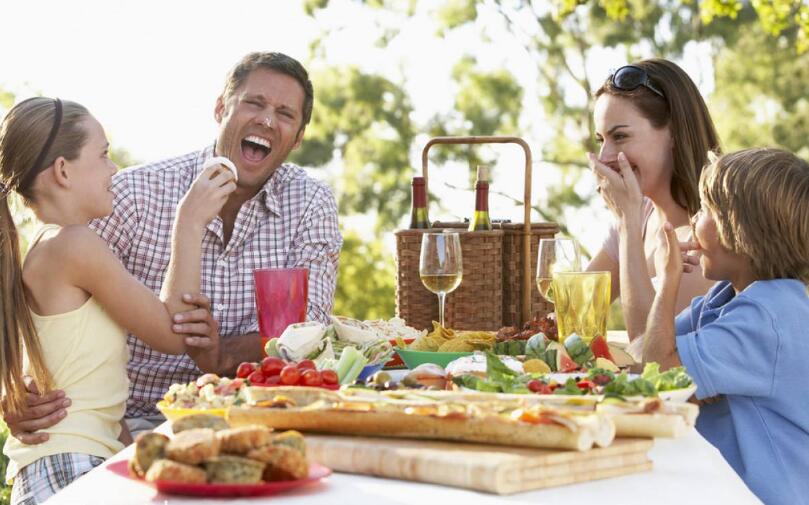