A Russian journalist who was reportedly murdered turned up alive in the middle of a televised news conference in Ukraine about his own killing.

On Tuesday, Ukrainian officials said Babchenko had been shot dead and that his wife had found him in a pool of blood. He is a critic of Russian President Vladimir Putin and his policy in Ukraine and Syria.

The report of his murder started a war of words between Ukraine and Russia. It also brought condemnation from the United States and European countries.

But on Wednesday, Babchenko appeared before reporters saying he had been part of a special Ukrainian operation to stop a Russian attempt on his life.

Babchenko apologized to his wife "for the hell she had to go through in the past two days." He said she did not know about the operation in advance.

Neither he nor Vasyl Gritsak, head of the Ukrainian Security Service, provided details of how they staged Babchenko's injuries or made his wife believe he was dead.

The surprise came as Gritsak held the news conference to announce that Ukrainian police had solved the reported killing.

Babchenko said he was approached by the Ukrainian Security Service a month ago to set up the operation.

"The important thing is my life has been saved and other, bigger terrorist attacks have been thwarted," he said.

Babchenko is one of Russia's best-known war reporters. He fled the country in February 2017 after receiving death threats against him and his family. He said his home address was published online and the threats he received were made by phone, email and social media.

I waited a long time, but not a soul turned up.

She was found lying in a pool of blood.

5.He said she did not know about the operation in advance.

Everything has been fixed in advance.

We are pleased with our purchases in advance.

6.Babchenko apologized to his wife "for the hell she had to go through in the past two days."

He was going through a very difficult time.

South Africa was going through a period of irreversible change. 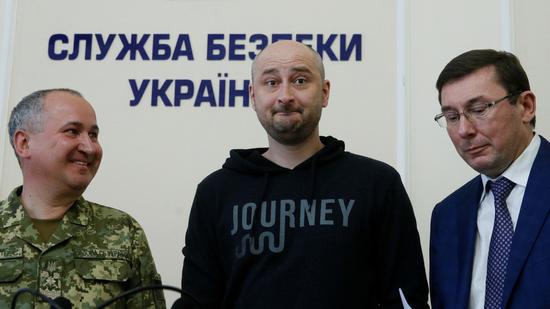