Gunman Kills 9 Students, One Teacher at High School in Texas

A gunman killed at least 10 people, most of them students, at a high school near Houston, Texas, on Friday state officials said.

At least ten others are wounded.

It was the deadliest attack in the United States since a school shooting in Parkland, Florida. That mass shooting led to a campaign by teenagers for new gun control laws.

Police have arrested a suspect in the attack at Santa Fe High School in Santa Fe, Texas. The state's governor Greg Abbott said the shooter was armed with a shotgun and a handgun. He said the suspect also had homemade bombs that were found in the school and nearby.

Abbott described the shooting as "one of the most heinous attacks that we've ever seen in the history of Texas schools."

He also said the suspect told police that he had planned to kill himself, but did not have the will to end his life and instead surrendered.

One hospital reported treating eight wounded individuals. Six were treated and released. One was listed in critical condition, and another in fair condition.

Seventeen-year-old Michael Farina said he was on the other side of the school when the shooting began. Farina said he thought it was a fire preparedness exercise. He was holding a door open for students in wheelchairs when an administrator came running toward him, telling everyone to run. Another teacher shouted, "It is real!"

Students were led to safety at a car shop across the street from the school. Some still did not feel safe and began jumping the fence behind the store to run farther, Farina said.

"I debated doing that myself," he added.

A law enforcement official identified the shooting suspect as 17-year-old Dimitrios Pagourtzis. The official, who asked not be identified, did not have permission to provide the name to the media.

Pagourtzis plays on the Santa Fe High School junior varsity football team. He is also a member of a dance group with a local Greek Orthodox church.

Governor Abbott said the guns he used belong, legally, to his father,.

Abbot added that one or two other people of interest were being questioned in connection with the attack.

The shooting is all but sure to restart the heated national debate over gun laws. Survivors of the February 14 attack in Parkland, Florida, took to social media to express sadness and anger about this latest school attack.

Marjory Stoneman Douglas student Jaclyn Corin tweeted, "My heart is so heavy for the students of Santa Fe High School. It's an all too familiar feeling no one should have to experience. I am so sorry this epidemic touched your town — Parkland will stand with you now and forever."

Corin also directed her anger at President Donald Trump. She wrote "Our children are being MURDERED and you're treating this like a game. This is the 22nd school shooting just this year. DO SOMETHING."

At a White House event, Trump described the shooting as "horrific" and one of many that have, in his words, "been going on too long in this country."

He's been away for at least a week.

They have very strict gun control in Sweden.

Police seized six homemade bombs and explosives from the house.

5.One was listed in critical condition, and another in fair condition.

Ten of the injured are said to be in critical condition.

He is in critical condition and his life may be in danger.

6.The state's governor Greg Abbott said the shooter was armed with a shotgun and a handgun.

City police said the man was armed with a revolver.

The man was armed with a sword, as well as a bow and arrows. 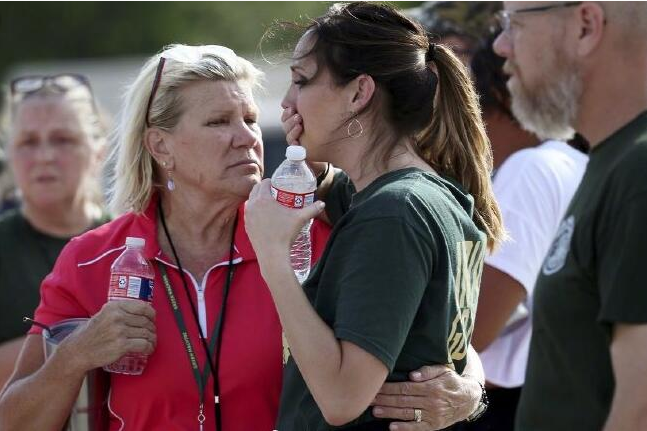