South Korea said on Wednesday that U.S. troops should stay in the country, even if a peace treaty is signed with North Korea.

Kim Eui-kyeom is a spokesperson for South Korea's President Moon Jae-in. Kim was responding to reporters' questions about a recent column written by a presidential adviser. It said that if a peace treaty was signed, justifying the presence of U.S. forces in South Korea would be difficult.

Kim said, "U.S. troops stationed in South Korea are an issue regarding the alliance between South Korea and the United States. It has nothing to do with signing peace treaties."

Another presidential official added that South Korea wants the U.S. to stay because its forces act as a mediator in case of military conflicts between powers such as China and Japan.

The United States currently has about 28,500 troops stationed in South Korea. American soldiers have been stationed there since the Korean War, which ended in 1953. North Korea has long demanded their withdrawal as one of the conditions for giving up its nuclear and missile programs.

However, U.S. troops were not discussed in last week's declaration by Moon Jae-in and North Korean leader Kim Jong Un. The two leaders said they would work for the "complete denuclearization" of the Korean peninsula.

The North Korean leader is also expected to meet with U.S. President Donald Trump in late May or June.

They finally negotiated a peace treaty.

A trained dog can act as a guide to a blind person.

Food seems to have been available, even if the quality left much to be desired.

He was relieved of his duties as presidential adviser.

5.It has nothing to do with signing peace treaties."

It has nothing to do with 与...无关

That's none of your business, it has nothing to do with you.

Quite evidently, it has nothing to do with social background.

6.Another presidential official added that South Korea wants the U.S. to stay because its forces act as a mediator in case of military conflicts between powers such as China and Japan.

Security forces have been put on standby in case of violence.

Many shops along the route have been boarded up in case of trouble. 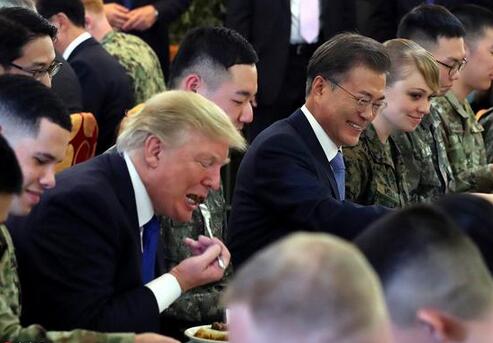