The leaders of North and South Korea held talks in the border village of Panmunjom on Friday.

The talks began with a historic first step as North Korean leader Kim Jong Un crossed the line that has divided the Korean peninsula for over 60 years. At the end of the meeting, the two countries released a joint declaration in support of peace and removal of nuclear weapons from the area.

He said, “Today, Chairman Kim Jong Un and I confirmed that the realization of the nuclear-free Korean peninsula through complete denuclearization is our common goal.”

Kim also expressed support for the joint declaration and earlier agreements between the two Koreas.

He said, “We have decided to open this transitional phase of improvement in relations and development through thoroughly implementing the North-South Declarations and all the agreements that have already been adopted.”

He spoke without explaining or providing details of the deal to end his country’s nuclear program.

Kim Jong Un is now the first North Korean leader to enter South Korea. He was greeted by Moon, who waited on the South Korean side of the demilitarization line between the two countries. The Korean War armistice was signed 65 years ago in Panmunjom. The armistice ended the fighting, but a peace agreement was never signed.

The two leaders smiled as they shook hands along the line dividing North and South Korea. Kim then stepped over a cement marker into the South.

Kim said he was “excited to meet at this historic place” and later wondered "why it took so long" to get there.

“It really has a strong emotional impact on me,” said Kim about the warm welcome he received from South Koreans.

President Moon told Kim he would like to visit North Korea one day. Laughing, the two together momentarily stepped over the border marker into the North’s side of the demilitarized zone.

The two leaders agreed to continue efforts to expand contacts. Ties had grown increasingly tense over North Korea’s nuclear and missile tests, especially efforts to develop nuclear armed intercontinental ballistic missiles. When fully ready, those weapons would have the ability to hit targets on the United States mainland.

“We declared together that there will be no more war on the Korean peninsula, and that a new era of peace has begun,” said Moon.

It also recognized as “meaningful and crucial” North Korea’s recent offer to suspend nuclear and missile tests, and to close its Punggye-ri nuclear test site. However, some observers have questioned whether these measures are meaningful since they only suspend, not reduce the country’s nuclear activities.

The declaration is meant to prepare for talks between the North Korean leader and U.S. President Donald Trump. The two men are expected to meet in May or June.

South Korean officials have told the Trump administration that Kim is prepared to promise to completely undo North Korea’s nuclear program. In exchange, he reportedly wants security guarantees from the U.S. government, development aid and an easing of international sanctions against the North.

Later Friday, President Trump praised the promises of peace and denuclearization. But he noted on Twitter that "only time will tell" if those goals are reached.

While Trump has expressed hope of reaching a nuclear deal with North Korea, he has said he will walk out of the meeting with Kim if there are signs it “is not going to be fruitful.”

It is certain that the contents of the Joint Declaration will not change.

They have not finalized the deal with the government.

A lot of countries, he says, had been able to balance their development aid against debt relief.

5.In exchange, he reportedly wants security guarantees from the U.S. government, development aid and an easing of international sanctions against the North.

The trade unions bargained away their rights in exchange for a small pay rise.

I let him have my watch, and took his camera in exchange.

6.While Trump has expressed hope of reaching a nuclear deal with North Korea, he has said he will walk out of the meeting with Kim if there are signs it “is not going to be fruitful.”

I can't allow you to walk out of here.

I didn't want to walk out of here alone. 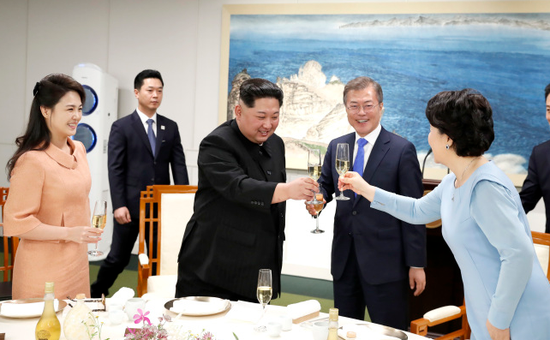