Life for women in Saudi Arabia is changing quickly. They are now experiencing new freedoms, such as riding a bicycle. The government announced the new policy earlier this month.

These freedoms are important for Saudi women like Amirah al-Turkistani.

In 2015, Amirah finished her studies in the American city of Boston. While living in Boston, she rode a light green bicycle. When she was preparing to return to her home in Jeddah, she decided to take her bicycle with her.

Her friends laughed at the idea.

"They told me, ‘What will you do with it in Jeddah, hang it on the wall?'" she said.

Riding a bicycle in public as a woman was unthinkable at the time. In Saudi Arabia, religious police watch public spaces to enforce conservative dress rules, bans on music and alcohol, prayer-time store closures and the mixing of unrelated men and women.

Now, three years later, Amirah often rides her same green bicycle along Jeddah's seaside paths. Sometimes she rides by herself, other times with her husband and children.

The new policy says that women must still be covered in an abaya when riding a bike. Abayas are loose-fitting, full-length robes. They are required public dress for Saudi women.

But abayas are changing, too. In the past, women could only where traditional black abayas. Now, Amirah chooses from several colors of abayas. She designs them herself.

"Jeddah today isn't the same as Jeddah five, six years ago," she said. "The scrutiny on clothes (has eased), there's more places to go, working opportunities for women are the same as for men."

In recent years, Saudi Arabia has been changing from its more traditional past.

Under a reform program aimed at modernizing the kingdom and reducing its economy's dependence on oil, Crown Prince Mohammed bin Salman has eased social restrictions. He has also ended a 40-year ban on movie theaters. And he has reduced the activities of the religious police.

Last year, the government announced it would permit women to drive cars, something Amirah is very ready for.

Amirah is a 30 year-old mother of two children. She has a full-time job teaching graphic design at Jeddah International College. She works on other design projects outside of work, as well. And she sells her handmade abayas.

In her free time, she does yoga. She also does strength training at an exercise center.

Amirah is part of a young generation of Saudi women seizing new chances.

Yet she realizes that not all women in this country of 32 million people have the same chances as her. Tribal customs, authoritative male relatives and religious conservatism keep many Saudi women from having the same rights.

"She can be (modern) but her family isn't," Amirah says of Saudi women. "She can be like this but her husband doesn't allow it." She adds that she believes some people oppose the new reforms.

"There's a change, that's true, but I'm talking about something very miniscule," she said. "I don't know about other places, other cities. I'm just talking about Jeddah."

I was just in grade school at the time, but I remember it perfectly.

I had little money and little free time.

Yoga is a popular form of movement that unites meditation, balance and strength training with focused breathing.

I contemplated leaving school and taking a full-time job.

5.Her friends laughed at the idea.

Six months ago she would have laughed at the idea.

I didn't want him to look foolish and be laughed at.

He hangs on tightly, his arms around my neck.

In the present climate, owners are hanging on to old ships. 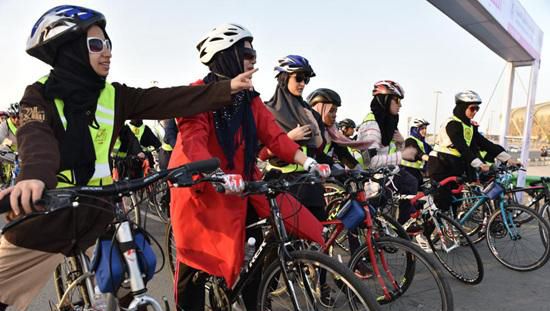