US House Speaker Announces His Retirement

Paul Ryan, the Speaker of the United States House of Representatives, says he will not seek another term in Congress.

Ryan is the top Republican Party lawmaker in the House. His announcement came as Congressional Republicans face worries over losing their majority in elections later this year.

All 435 members of the House are required to seek re-election every two years. Republicans currently hold 237 House seats. The Democratic Party controls 192 seats.

Ryan joined a growing list of lawmakers who have decided against seeking re-election. Thirty-seven Republican House members are leaving office when their term ends in January 2019. On the Democratic side, 17 House members chose not to seek another term.

The Democratic Party was more popular among likely voters in recent opinion studies. The survey data found that the Democrats are between 5 to 11 percentage points higher than the Republicans.

Speaking in Washington on Wednesday, Ryan said his decision to retire was not based on a fear of losing his party's majority in the House. He said he wanted to spend more time with his wife and three children.

Ryan said that he has accomplished a lot in a short time as speaker. He added, "We're going to have a great record to run on." Ryan will leave Congress when his term ends.

Years in the House

Ryan was first elected to Congress in 1998. At the age of 28, he became known as one of the "Young Guns" in the Republican Party.

In 2012, Republican presidential candidate Mitt Romney asked Ryan to serve as the party's candidate for vice president. They lost the election to then-President Barack Obama and Vice President Joe Biden.

Three years ago, Ryan accepted the job of House Speaker after the sudden retirement of speaker John Boehner.

Ryan has long sought for tax cuts and reforms to government entitlement programs. He also wants to overturn the Affordable Care Act, which expanded the nation's health care system. In 2010, President Obama signed the act into law. Today, both supporters and opponents of the law call it Obamacare.

The house speaker announced his plans at a closed-door meeting of Republican lawmakers Wednesday morning. Ryan told them that serving as speaker has been the professional honor of his life, and he thanked them for the trust they placed in him.

Ryan's spokesman said in a statement, "After nearly 20 years in the House, the speaker is proud of all that has been accomplished and is ready to devote more of his time to being a husband and a father."

Many of the delegates then wanted Reagan to be the party's vice presidential candidate.

He volunteered to serve as the manager of our department store.

His opponents have no intention of letting him off the hook until he agrees to leave office immediately.

5.Ryan said that he has accomplished a lot in a short time as speaker.

in a short time 不久；短时间的

It's so difficult work that we can't finish it in a short time.

With passion, I can be more efficiently, and I can do more in a short time.

6.Ryan joined a growing list of lawmakers who have decided against seeking re-election.

We are making a list of the top ten men we would not want to be married to. 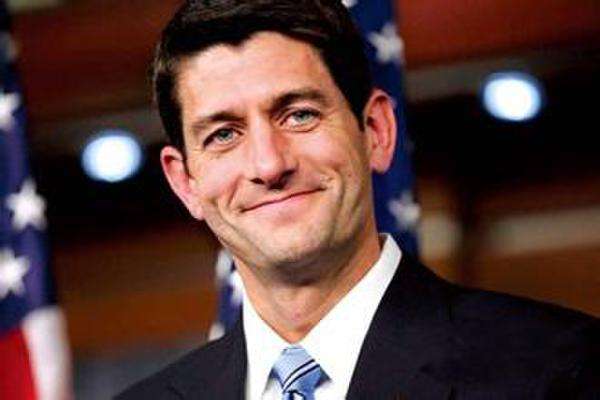