American President Donald Trump and former Vice President Joe Biden are both over the age of 70. But they recently exchanged insults that some say make them seem like school-aged children.

During the 2016 presidential campaign, Biden criticized Trump's moral standing after a 2005 video showed Trump bragging that he could touch women sexually without their permission. Trump said, "When you're a star, they let you do it. You can do anything." At the time, Trump was starring on his reality television show "The Apprentice."

When that video went viral in October 2016, Biden was still vice president. As a Democrat, he supported Trump's opponent, Hillary Clinton, in the presidential race.

After seeing the video, Biden said that if he had been in high school with Trump, he would have taken him outside and beaten him up.

This week, Biden brought up that feeling again.

He spoke Tuesday at the University of Miami in Ohio at an event for his "It's On Us" advocacy group. The group aims to change the culture that surrounds sexual violence on college campuses.

Biden said of Trump, "A guy who ended up becoming our national leader said, 'I can grab a woman anywhere and she likes it...' They asked me if I'd like to debate this gentleman, and I said 'no.' I said, 'If we were in high school, I'd take him behind the gym and beat the hell out of him.'"

During the election, Trump and his supporters described Trump's comments in the video as "locker room talk." In other words, the comments included rude, sexual language between men that was not meant to be heard in public.

Biden said on Tuesday, "I've been in a lot of locker rooms my whole life....Any guy that talked that way was usually the fattest, ugliest...in the room."

On Thursday, Trump decided to answer Biden's comments about him. He did so on Twitter.

The president tweeted, "Crazy Joe Biden is trying to act like a tough guy. Actually, he is weak, both mentally and physically, and yet he threatens me, for the second time, with physical assault."

The president also wrote that if the two decided to fight, Biden would "go down fast and hard, crying all the way."

By Thursday afternoon, the president's post had been retweeted nearly 50,000 times. It also has more than 70,000 comments. Some people made jokes or mocking comments about either Trump or Biden. Others suggested that both men should "grow up."

One Twitter user wrote, "Comments from both of them about physical violence are neither productive nor appropriate from men who view themselves as leaders."

Kate was in a hurry to grow up, eager for knowledge and experience

I threatened him with physical violence, and he reported me.

Many Mexicans still resent what they view as a land grab by the United States.

5.The president also wrote that if the two decided to fight, Biden would "go down fast and hard, crying all the way."

Only two go down at the end of this season.

Their aircraft went down during a training exercise.

6.At the time, Trump was starring on his reality television show "The Apprentice."

I was out of work at the time.

I was not in Britain at the time. 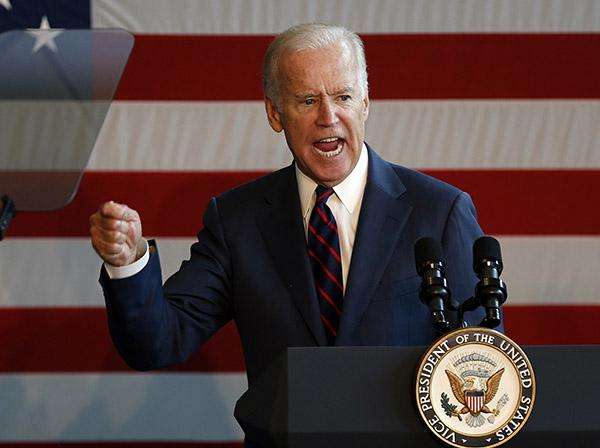