Japan’s Abe: North Korea Must ‘Match Words with Actions’
Japanese Prime Minister Shinzo Abe is expressing caution about planned talks between North Korean leader Kim Jong Un and U.S. President Donald Trump.
Abe met Tuesday in Tokyo with the head of South Korea's National Intelligence Service, Suh Hoon. Before the meeting, the Japanese leader said he welcomed any new denuclearization talks with North Korea. But he also said he believes it is "extremely important" that North Korea "match its words with actions."
Abe also told reporters that any high-level talks with the North should also include discussions of other issues. One of those issues is a dispute with Pyongyang over kidnappings of Japanese citizens by North Korean agents in the 1970s and 1980s.
Abe said resolving the kidnapping issue with North Korea has been a longstanding Japanese government policy. The Japanese leader has repeatedly called on North Korea to return at least 13 people that Pyongyang has admitted to kidnapping.
He has also demanded that the North provide information about other people Japan believes were taken and used to train North Korean spies. So far, North Korea has allowed five people it kidnapped to return to Japan, Reuters news agency reported.
A Japanese government official told Reuters that Japan was considering setting up a direct meeting between Abe and Kim Jong Un to discuss the kidnapping issue.
Japan's request to have the issue brought up in upcoming talks with North Korea was not included in a South Korean statement about Suh's talks with Abe.
The statement, released by the presidential Blue House, said Abe told Suh he did not believe the North would use high-level talks to buy time to keep developing its nuclear and missile programs.
Suh was part of South Korea's team that recently held talks with Kim Jong Un and other officials in North Korea. He traveled to Tokyo to brief Japanese officials on the talks, while another member of the team informed Chinese officials in Beijing.
After the talks, South Korea announced Kim had agreed to hold separate, direct meetings with South Korean President Moon Jae-in and President Trump. Officials have said Kim and Moon will hold talks in late April, while the Trump meeting is supposed to happen by May.
I'm Bryan Lynn.

I solemnly vowed that someday I would return to live in Europe.
我郑重发誓，总有一天我将回到欧洲生活Tz+jCo_gHr%|%6Tk。

They traveled to Shanghai in third class.
他们乘三等舱去上海旅行xlDKHk7[^|&yXw8c。

He's been away for at least a week.
他走了总有一个星期吧rONk^bLQ8wW~Q。

5.Japan's request to have the issue brought up in upcoming talks with North Korea was not included in a South Korean statement about Suh's talks with Abe.

I brought up my seven children single-handed.
我独自一人抚养了7个孩子tR)VmD|8OHYV-ACL。
He brought up a subject rarely raised during the course of this campaign.
他提出了一个在这次运动中很少被提及的话题QEFu-Hfkv;xRC|2a&X。

What have you found so far?
你到目前为止发现了什么？
So far we haven't been able to find anything, but we're still researching.
目前我们还没有任何发现，但是我们仍在研究pTE+giPbT9WxYg。 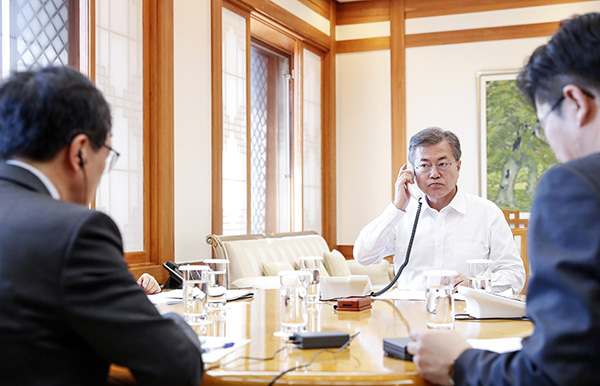