Trump Dismisses Tillerson, Nominates Pompeo for State
President Donald Trump has dismissed U.S. Secretary of State Rex Tillerson.
Trump announced the change in a message on the social media network Twitter early Tuesday. The announcement came four hours after Tillerson returned to Washington from a trip to Africa.
Trump said he would nominate Mike Pompeo, the director of the Central Intelligence Agency, to replace Tillerson. The move comes as the administration prepares for important talks with North Korea.
"Mike Pompeo, Director of the CIA, will become our new Secretary of State," Trump tweeted. "He will do a fantastic job! Thank you to Rex Tillerson for his service! Gina Haspel will become the new Director of the CIA, and the first woman so chosen. Congratulations to all!"
Both appointments must be confirmed by the Senate.
Speaking this morning, the president said he and Tillerson "disagreed on things," including their opinions about the Iran nuclear deal.
For months, officials have spoken about Trump's dissatisfaction with Tillerson although Tillerson insisted he did not plan to leave.
Rumors about disagreements between Trump and Tillerson began spreading last year.
In October, NBC News reported that Tillerson called the president a "moron," something Tillerson never actually denied. Tillerson continued to insist his relationship with the president was solid and denied rumors of problems between them.
Two officials familiar with the situation said that Tillerson had been fired by Trump on Friday, while in Africa. However, that was not clear as Tillerson returned to Washington early Tuesday from Nigeria.
But Tillerson had cut short his trip by one night. He told reporters he had been sick in Africa and had not slept well because of urgent issues, including the North Korea announcement.
"I felt like, look, I just need to get back," Tillerson said.
One top Trump administration official said dismissing Tillerson had been discussed at many levels for a long time. The official said the situation with North Korea and the invitation to meet brought more urgency to the decision.
Two officials said Trump wanted to have a new team in place before the meeting with North Korean leader Kim Jong Un and also before trade talks.
The officials were not authorized to speak publicly and demanded that their names not be released.
Tillerson also was known for his ties with Russia and Russian President Vladimir Putin. He developed the ties as an executive for U.S. oil company Exxon.
Tillerson joined a long list of senior officials who have either resigned or been fired since Trump took office in January 2017.
Others include strategist Steve Bannon, national security adviser Michael Flynn, FBI Director James Comey, White House chief of staff Reince Priebus, communications director Anthony Scaramucci, and press secretary Sean Spicer.
Recently, staff secretary Rob Porter, communications director Hope Hicks and economic adviser Gary Cohn have resigned from the administration.
I'm Mario Ritter.

We have all witnessed the power of social media.
我们见证了社交媒体的实力nR-aw~zZC]FyUTpb。

They are all against the nuclear deal with Iran.
他们全都反对与伊朗的核协议arB*]g3LNDu。

We are very familiar with each other.
我们相互之间很熟t)^yh[^qWWlw;5。

It wasn't until we had sat down to eat that we got back to the subject of Tom Halliday.
我们直到坐下来吃饭时才又提起汤姆·哈利迪这个话题PnorBFp6Mkh3A9DKk。
You have 14 days in which you can cancel the contract and get your money back.
你可在14天之内取消合同，收回钱款dQowBhBFG4w。

6.Tillerson joined a long list of senior officials who have either resigned or been fired since Trump took office in January 2017.

New public opinion polls show the president's approval rating at its lowest point since he took office.
新的民意调查显示总统的支持率跌到了他就职以来的最低点NiMeK,PM!-(=。
By the time I took office, the war in Afghanistan had entered its seventh year.
在我上任的时候，阿富汗战争已经进入了第七个年头H=-4~l;iWVb[x9。 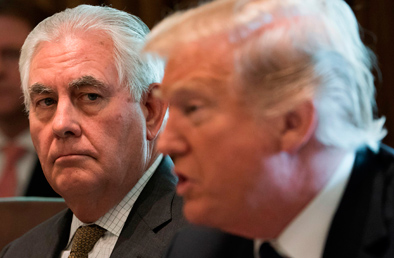