Double Arm Transplant Gives Former US Soldier a New Life
American John Peck lost his arms and legs in an explosion in Afghanistan in 2010. But unlike others who suffer such a loss, Peck does not have prosthetic arms.
Doctors instead performed a successful double arm transplant operation on Peck. The retired Marine Corps Sergeant is now learning to use his replacement arms at Walter Reed National Military Medical Center in Maryland.
As Peck learns to use his new arms, he thinks about the family that donated the arms of their dead son.
"You know the first few minutes I was happy. But then I started to think about, you know, my emotions started to change, and it changed to the point where I was more...I was upset. Like I was, you know, I knew that somebody died and it wasn't about me at that minute, it was about the individual that lost their lives."
Transplant operations are not new, and many patients are helped by transplanted organs. John Peck says his situation is different.
"So like an organ transplant is different. Like, they cannot see inside of their body, but every day I look down, I'm like, 'Ah, hey! This is somebody else's hand or this is somebody else's elbow that I am moving back and forth.' But I don't see it as, you know...it's just weird, just part of my norm now..."
Peck wore prosthetics before doctors gave him the replacement arms. The change has been hard, but physical therapists like Annemarie Orr says he is making progress.
"John and I have been working together for about, what is it, John? A year, a year and a half, and so the progress has been huge, I mean, in terms of the rate of motion in his arms and strength and his ability again, to be more independent with his daily activities...
Physical therapy assistant Alyssa Olsen is also working with Peck.
"In the time that we have started working together, we are pushing to, progressing to using his hands more and more and more, and he's getting function back.
At Walter Reed, there are many patients who lost their arms or arms on the battlefield. Most receive prosthetics, but Peck agreed to try the transplant. Not everyone thinks transplants are a good idea because of the possibility that the body may reject another person's limb. Patients like Peck must take up to 30 pills a day to stay healthy and stop medical complications.
"It was worth it, it was worth it to me. I have goals. I want to be independent. I want to be able to do things for myself."
The operation took 16 hours and involved nearly 60 doctors and medical specialists. It has given John Peck a new life.
I'm Susan Shand.

She was not wearing her prosthetic arm.
她没有佩戴她的义肢K.gf(bfJ(qP@|tG,4zu4。

To prevent Tana from suffering any medical complications, the doctors decided to surgically sterilize Tana, removing her genitals.
为了防止Tana患上并发症，医生决定切除她的生殖器，给她做绝育手术~9bSaAK%6p0+,DkOs!。

My daily activities include swimming and jogging.
我的每日活动包含游泳和慢跑![B-Uh%mlo。

5.I mean, in terms of the rate of motion in his arms and strength and his ability again, to be more independent with his daily activities...

Basically I think he would be someone who complemented me in terms of character.
我基本上认为他是在性格上和我互补的人%7xNcRLzOCz0r。
They have found that, in terms of both salary and career success, the sky is the limit.
他们发现，就收入和事业成功来讲，多高都有可能的nR1*yLnHIn9]7P。

6.Patients like Peck must take up to 30 pills a day to stay healthy and stop medical complications.

He did not particularly want to take up a competitive sport.
他并不特别想从事竞技体育运动7Lzh|~3nKv8KPU9DNz%o。
He will take up his post as the head of the civil courts at the end of next month.
他将在下个月底就任民事法庭庭长一职nVQ]R7CuQ^.^sgk44+b&。 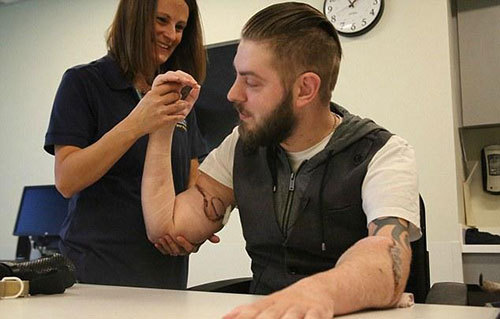