Valentine's Day celebrates love. It is a day to exchange flowers, candy, and greeting cards with your husband or wife, or someone else you desire. It is a popular day to become engaged and to get married.
Historians argue about the earliest roots of Valentine's Day. Many say it is linked to the ancient Roman festival of Lupercalia, which was observed on the 15th of February. That day celebrated the coming of spring and female fertility.
Then, around 1,500 years ago, Christians supposedly began to celebrate the feast day of St. Valentine on February 14.
However, there are several Saint Valentines and several stories about them. One involves Valentine of Terni, a Christian clergyman. He was said to have violated the orders of Roman Emperor Claudius the 2nd.
Claudius was having trouble getting married men to serve as soldiers. So, he banned marriage. Valentine considered the ban immoral and secretly married young Christian lovers, anyway. When the Emperor learned of the actions, he ordered Valentine's death. The execution is said to have happened on February 14, around the year 300.
Some people say this is the reason the holiday is linked to love.
The exchange of valentines, or written expressions of love, began in the 1500s. The tradition remains popular today. Valentine cards usually include images of hearts, flowers, or Cupid, the Roman god of love and desire. The cards also often include poems. One valentine from the year 1910 reads: When we meet: The flowers look brighter, And all on earth seems sweet, My heart is always lighter, My darling, when we meet.
But Valentine's Day is not only for romance. It can also be a day to celebrate love of family and friends.
I'm Dorothy Gundy.

If a couple has had everything when they get married, what should they expect in the future?
如果一对夫妇在结婚时拥有了一切，那他们对未来还有什么期待呢？

The concept of democracy has a positive connotation to them because it is linked to a concept that they value.
他们对于民主这个词有很强的认同感，因为这个词被连接到一个他们所珍视的概念jqi_Iyxi+wFBVylaQG1I。

4.be said to do sth 据说做某事

He is said to have already been removed from office.
据说他已经被免职了FxUyw.=v0H@@+x。

5.Then, around 1,500 years ago, Christians supposedly began to celebrate the feast day of St. Valentine on February 14.

begin to do sth 开始做某事

The drunkard began to rave again.
She began to flush with excitement.
她由于激动脸开始发红PI[iWnsNSeN。

6.Claudius was having trouble getting married men to serve as soldiers.

He was served as a general.
他被任命为将军dsb.v&KSm5ILq,RiT。
Newspaper serves me as a curtain.
我用报纸权充窗帘j7-H%Ni=%Co98JDI2。 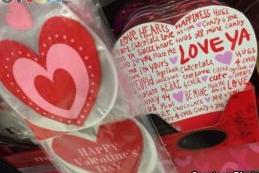