South Korean Tennis Player Defeats His Idol, Novak Djokovic
This is What's Trending today ...
Novak Djokovic of Serbia is one of the best tennis players in the world. He has won 68 professional ATP tennis tournaments including 12 Grand Slam championships. Six of his Grand Slam victories came from the Australian Open championships in the city of Melbourne.
Chung Hyeon of South Korea has won just one, an ATP tournament for players at the age of 21 and younger last November. Chung started playing tennis at the age of 6. His professional tennis biography said, "Growing up, [I] looked up to Novak Djokovic because of his ‘fantastic game and mental strength.'"
When Novak Djokovic stepped on the court at the Australian Open Monday against Chung, he did not know that he was about to see a clone of himself.
The difficult match lasted three hours and 21 minutes. Djokovic battled an opponent who chased down balls and returned shots from every angle. These are the defensive skills that Djokovic is known for.
Chung won 34 of the 54 rallies that continued for at least nine strokes. In the second set, Chung won a 33-shot rally. Chung also saved 14 of the 19 break points he faced against Djokovic. And he hit 39 winning shots against one of the fastest professional tennis players today.
The young Korean celebrated very little after defeating Djokovic in straight sets, 7-6, 7-5 and 7-6. But the crowd, which included many Koreans, stood and cheered him.
Djokovic called Chung's play "an amazing performance." He said, "Whenever he was in trouble he came out with some great passing shots and at the back of the court he was like a wall."
After the match, Chung said, "I can play two more hours. I‘m younger than Novak so I don't care!"
About his play, he said, "I was just trying to copy Novak because he's my idol. My dreams have come true tonight."
With his victory, Chung became the first Korean to reach a Grand Slam quarterfinal. He will face American Tennys Sandgren in the next round.
And that's what's trending today.
I'm Dorothy Gundy.

You can make that dream come true.
你可以让那个梦想实现3R.ulxJW#u4-@q(.CPu.。

This new transformation is at least as consequential as that one was.
这一新的转变至少和那次一样重要Mr8i-f%New1MC。

There was a metallic taste at the back of his throat.
他喉咙深处有一股金属味儿7[J2KLId^!fq]HbEqd。

5.After the match, Chung said, "I can play two more hours. I‘m younger than Novak so I don't care!"

I don't care what colour she is.
我不在乎她的肤色T]GK4g4+J]C。
I don't care about the matter.
我对这事毫不介意YP)9)A^*ASMM6。

6.He said, "Whenever he was in trouble he came out with some great passing shots and at the back of the court he was like a wall."

The economy was in trouble.
经济处于困境中([!XiKZ#PtK。
People are saying if we don't buck up we'll be in trouble.
人们说，如果我们再不积极行动起来，我们就会有麻烦dZ;vF^3#4#c。 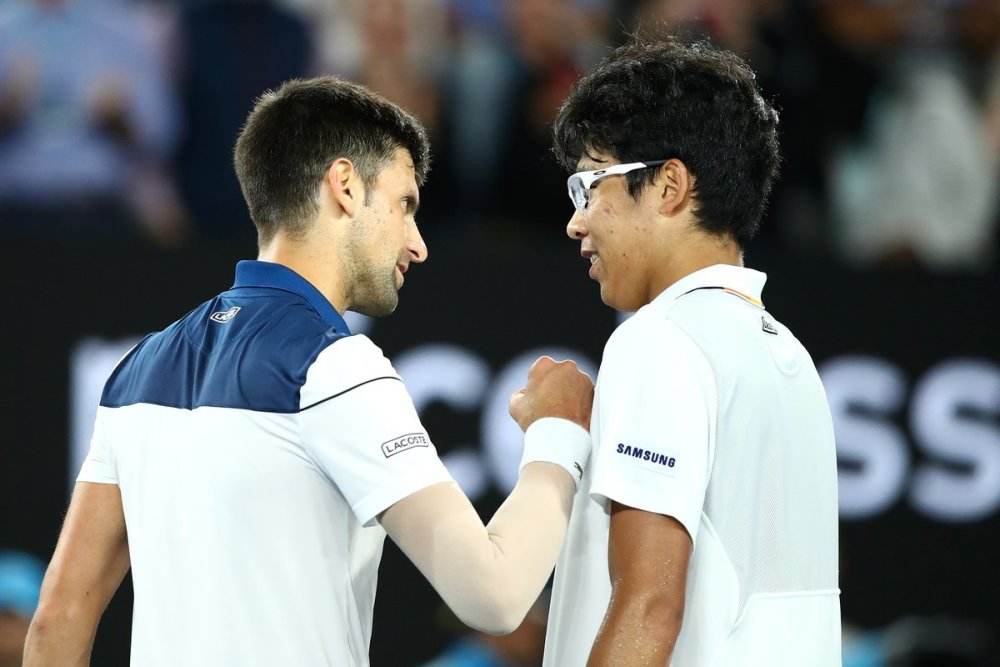