Scientists Discover a Dinosaur with Shiny, Color-Changing Feathers
Scientists recently announced the discovery of a small, bird-like dinosaur from China which had unusual, colorful feathers.
The scientists named the dinosaur Caihong, the Mandarin word for rainbow. They discovered the nearly complete and almost entirely undamaged fossil in Hebei Province.
Microscopic structures in the fossil suggest that the creature had wide, shiny feathers. The feathers mostly covered the dinosaur's head and upper body. The colors of those feather would have appeared to change depending on how the light hit them.
The colorful dinosaur lived 161 million years ago during the Jurassic Period of earth's history.
Chad Eliason is an evolutionary biologist with the Field Museum in Chicago, Illinois. He helped write the study announcing the discovery in the scientific publication Nature Communications. Eliason told the Reuters news service that the discovery "suggests a more colorful Jurassic World than we previously imagined."
The scientists used powerful microscopes to identify the remains of the cell structures responsible for the apparent color of the feathers. The shape of those structures appears to have influenced what color the feathers would have. Round-shaped structures in the Caihong fossil show that it had feathers similar to that of a modern day hummingbird.
Much of Caihong's body had dark feathers. The shiny, color-changing feathers covered its head and neck. The dinosaur had many bird-like qualities. But researchers doubt that it could actually fly.
Its feathers could have served the purpose of gaining the attention of sexual partners while also providing protection from heat and cold.
Caihong was two-legged and had a long, narrow head with sharp teeth. It had boney crests above its eyes, and it hunted other, smaller animals for food.
Scientists say many dinosaurs had feathers. Birds evolved from small feathered dinosaurs near the end of the Jurassic Period.
A dinosaur of a different feather
Caihong had two kinds of feathers. It also is the earliest-known creature with feathers that did not have the same shape on both sides. This is a physical quality that modern birds have and use to direct themselves while flying.
The unevenly shaped feathers on Caihong were on its tail. This suggests that tail feathers, not arm feathers, were first used to improve movement through the air in flying dinosaurs, scientists said.
Xing Xu is a paleontologist with the Chinese Academy of Sciences. Xing Xu said, "It is extremely similar to some early birds such as Archaeopteryx." Archaeopteryx is the earliest known bird. It is believed to have lived 150 million years ago.
"To be honest, I am not sure what function the feathers have," Xing Xu added. "And I don't think that you can completely exclude the possibility that the feathers helped the animal to get in the air."
The dinosaur's full scientific name is Caihong juji, which means "rainbow with a big crest."
I'm -Pete Musto.

I tend to have a different answer, depending on the family.
根据家庭的不同，我往往会给出不同的答案-;@Qz#V)z%aDfB]。

2.It is believed to 据信

It is not known exactly how they died, although it is believed to be natural causes.
这两只狗的死亡原因均不详，但人们普遍相信是自然死亡8EdcP.Ugt-。

I tried to get in touch with you yesterday evening, but I think you were out.
我昨晚想要和你联系，但好像你不在家里|;VO)Rz#*;n。

My opinions are similar to his.
我和他的看法相似7oHZ94S)u@CfNF。

5."To be honest, I am not sure what function the feathers have," Xing Xu added.

To be honest, he is too aggressive.
平心而论，他太倔强了yr6mES;o]^_。
To be honest, I just don't want to go.
说心里话，我真不想去9JZWi~JQEPJ](Kp。

6.Scientists say many dinosaurs had feathers. Birds evolved from small feathered dinosaurs near the end of the Jurassic Period. 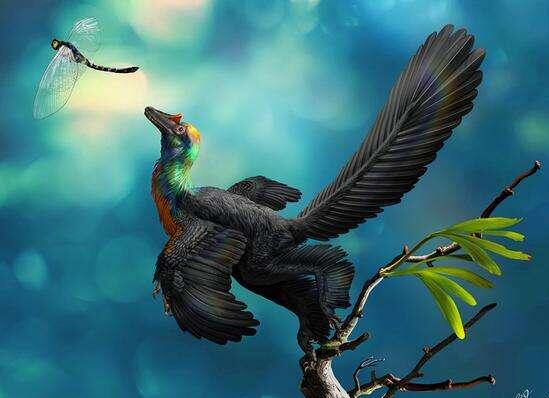