YouTube Punishes Blogger After Video of Apparent Suicide Victim
This is What's Trending Today...
YouTube says it has punished an American blogger over a video that appeared to show the body of a suicide victim.
The blogger, Logan Paul, took the video in the Aokigahara forest, near Japan's Mount Fuji. The area is known as a place where a number of people have taken their lives in recent years.
In the video, Paul and his friends see a man's hanging body from a tree. They react with shock, but also make jokes.
Suicide rates in Japan are among the highest in the world. About 21,000 people there commit suicide each year, according to Japanese government estimates.
YouTube said in a statement that it has removed Logan Paul's channels from Google Preferred, which presents top YouTube videos. The company offers those videos to advertisers.
YouTube also said it will not include Paul in the new season of a web-based series called "Foursome." And it said his new videos are no longer being published.
Paul's YouTube channel has more than 15 million subscribers. He has more than 4 million followers on Twitter. The video filmed in the Japanese forest received over 6 million views before Paul took it down.
YouTube bars violent content that is shown in a shocking or disrespectful way, the company says. It issued a "strike" against Paul's channel for violating its community rules after the video was published.
Paul announced earlier this month he was taking a break from making YouTube videos "to reflect." He has also published several apology videos and posts on social media.
But Paul continues to face strong criticism for the apparent suicide victim video as well as other video blogs he published during his visit to Japan.
I'm Bryan Lynn.

We have all witnessed the power of social media.
我们见证了社交媒体的实力v@VgTNzKN,zC。

She believes the world's most famous suicide victim was brutally murdered.
她认为世界上最有名的自杀者是被残忍地杀害的7*82@|fhL#Xa;。

China has always been known as a land of propriety and righteousness.
中国从来以礼义之邦著称B6=0.k9kD,*WqGr@0OD。

We have lived here quite a number of years.
我们在这儿住了好些年了49]Ugx&.]Cgiv]NN。

5.In the video, Paul and his friends see a man's hanging body from a tree. They react with shock, but also make jokes.

You will not make jokes about him. He has been very good to me.
别开他的玩笑，他一直对我很好^IOSoX6=VE|E。
I think it's very unkind to make jokes at the expense of other people.
我觉得开玩笑捉弄别人是太刻薄了JyTJ%pHGOY。

6.Paul announced earlier this month he was taking a break from making YouTube videos "to reflect."

We head a3-hour meeting yesterday without taking a break.
我们昨天开了一个3小时的会，中间没有休息R8+424-F+|I。
The nurses said he was taking a break from work.
护士说他请假了MNSf6_[bntnmU&huo7。 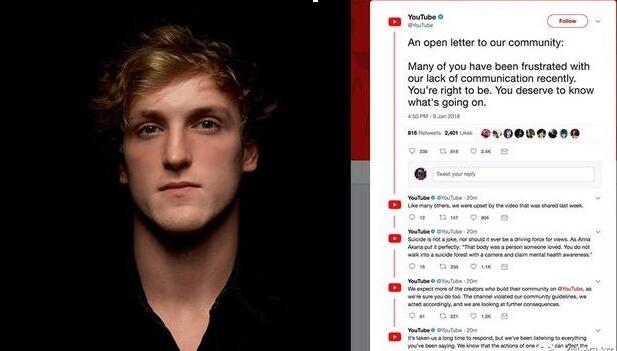