Small Bomb Explodes in New York Subway, 4 Injured
A small bomb exploded near an underground train station in New York's Times Square on Monday. The explosion during rush hour injured the suspected bomber and three other people.
All four were sent to the hospital for treatment. Police described the incident as an attempted terror attack.
The explosion happened in an underground passageway that connects Times Square station on 42nd Street to a station under the Port Authority Bus Terminal. Many people were in the passageway when the explosion caused it to fill with smoke.
New York City Mayor Bill de Blasio said, "Thank God the perpetrator did not achieve his ultimate goals."
The suspect was identified as 27-year-old Akayed Ullah.
New York officials said the Islamic State terrorist group inspired the suspect but that he did not have direct contact with the group. Officials said he lives in Brooklyn and possibly was born in Bangladesh.
A video from a security camera shows the suspect in the tunnel when the bomb exploded in a burst of white smoke. It shows the suspect on the ground and people fleeing the area.
The New York Post newspaper published a photo of the man lying on the ground with his shirt torn off and burn marks on his body. The photograph also shows police officers holding the man's hands behind his back.
The explosion at 7:30 a.m. closed the nation's busiest bus station, eight underground train lines and all the streets around Times Square.
Elrana Peralta works close to where the bomb exploded. She did not hear the explosion. She said, "All we could hear was the chaos. We could hear people yelling, ‘Get out! Get out! Get out!'
John Miles was waiting for a bus to Massachusetts. He also did not hear the explosion, but saw police react.
"I didn't know what was going on. Officers were running around. I was freaking out," he said. There was an announcement that people should leave the area.
On October 31, another act of terror killed eight people in New York City. The suspect in that attack drove a truck down a crowded bicycle path.
Officials said the area of Monday's explosion would be re-opened by the nighttime rush hour.
White House Press Secretary Sarah Sanders tweeted that President Donald Trump had been briefed on the explosion.
I'm Jonathan Evans.

His daughter Carly drove him to the train station.
他女儿卡莉开车将他送到火车站B9198E1E%AHt259o=0o3。

During the evening rush hour it was often solid with vehicles.
在交通的晚高峰时段，这里通常被车辆堵得水泄不通z6c.B]jnawMu0V。

5.New York officials said the Islamic State terrorist group inspired the suspect but that he did not have direct contact with the group.

6.The New York Post newspaper published a photo of the man lying on the ground with his shirt torn off and burn marks on his body.

The front cover of the novel has been torn off.
这本小说的封面已被撕掉ipFbJ.f%QNkG6。
It was worth almost having your ear torn off.
你耳朵差点被撕掉也是值得的X#2,(Gu@S2I4d[nMc。 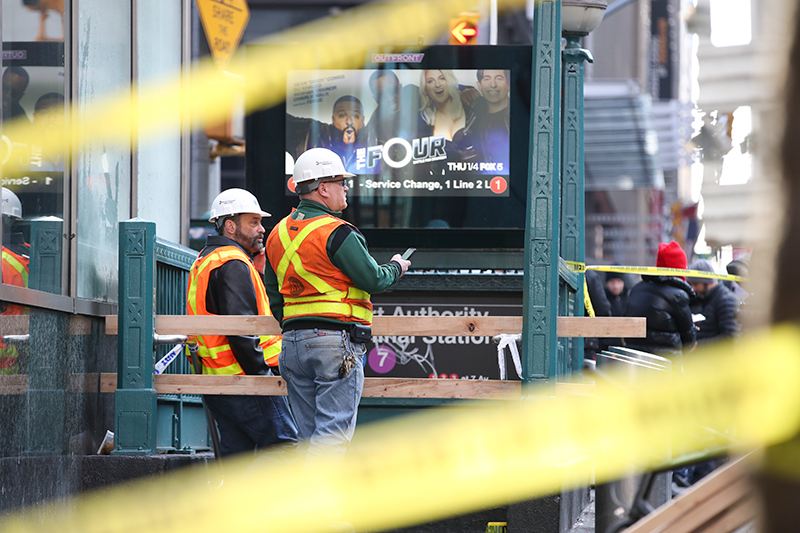