Albino Student Receives Top Honors in Kenya's National Exam
Almost one million primary school children took the 2017 Kenya Certificate of Primary Education exam, known as the KCPE.
Goldalyn Kakuya, a student from Saint Anne's Junior School in Lubao, Kakamega, in West Kenya, received top honors. She received a total of 455 marks out of a possible 500.
"I was really happy about it. I am excited a lot because it has passed a message to so many people. So, what thrills me most is that it has opened the eyes of many people."
Goldalyn's success surprised many Kenyans because she has albinism, a genetic condition that causes a pink coloring in the eyes and a lack of color in the skin or hair. People with albinism often face discrimination in Africa, and children struggle to find educational opportunities.
Isaac Mwaura is a Kenyan lawmaker and chairman of the Albinism Society of Kenya.
"People have talent, and given the opportunity, they can do so. So, I would want to really say that young children with albinism across Africa and, indeed, the world, because there is a lot of persecution and discrimination that is geared toward people with albinism, that they feel encouraged, that they too can reach the top."
He added that families and society should accept and support people with albinism.
Matilda Cherono Tanga is the girl's mother. She agrees that discrimination against people with albinism is common.
"People will not even imagine that these children have a perfect brain. They think they cannot learn, they cannot compete. But the performance and the achievement of Goldalyn has proved to the society that albinism is just a condition of the skin."
Goldalyn told VOA she worked hard for her success. She examined her school work, asked teachers questions, rarely missed her classes, and studied hard. She offers this advice to other students.
"Pray hard, do your best, believe in your yourself, because if you are praying, and you are working toward your goal, what can deter you from that? So, it is just a matter of being confident," she said.
All students who received 400 marks or more will be admitted to Kenya's national secondary schools. This year, about 10,000 boys and girls reached that level.
I'm Susan Shand.

He used to be a teacher of maths in that primary school.
他曾经是名教习，在那所小学教数学=W2xnj_^t61。

China has always been known as a land of propriety and righteousness.
中国从来以礼义之邦著称*lio~8tp4&JE.lnWM。

The companies have a total of 1,776 employees.
这些公司总计有1,776名员工Gr0XWTmJAu3KtqyNMR1。

5.Goldalyn's success surprised many Kenyans because she has albinism, a genetic condition that causes a pink coloring in the eyes and a lack of color in the skin or hair.

There is a lack of trust towards the central government in Rome.
人们对罗马的中央政府缺乏信任b!3@DC[ohiXKK#y8wvW。
Relief agencies say the immediate problem is not a lack of food, but transportation.
救援机构称最紧迫的问题不是食物匮乏，而是运输不畅Sk~j=w.Z|;xb!。

6.That they feel encouraged, that they too can reach the top."

When you reach the top of a mountain, the worst part is climbing down.
当你爬上山顶以后，下山就是最困难的事了feK&+WEn5l)QdE_!GTsD。
It took us six hours to reach the top.
我们花了六个小时到了山顶+j8A=8heY_[2t。 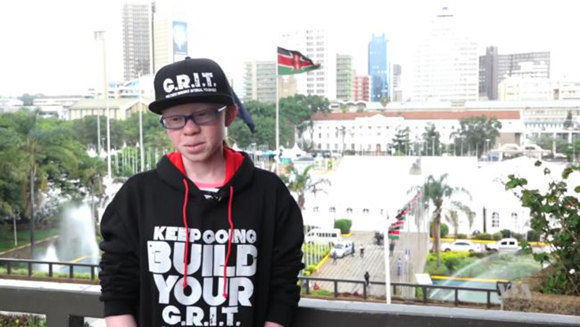