Zimbabwe’s New President Promises Reform, Urges Forgiveness
Zimbabwe has its first new leader in nearly 40 years.
Emmerson Mnangagwa was sworn-in as the country's president on Friday, ending 37 years of rule by Robert Mugabe. Mugabe resigned on Tuesday after intense pressure from the military and the ruling party.
The new president spoke to a crowd at the 60,000-seat National Sports Stadium in Harare. He praised the former president, and promised to hold democratic elections next year.
Mnangagwa called Mugabe the "father of our nation," but also said he made some mistakes while serving as president. He added that Zimbabweans should "never remain hostages" of their past, and urged them to begin rebuilding "our great country."
Changes to government policy
Mnangagwa says he wants to compensate farmers who lost their land under Mugabe's rule.
Mugabe critics say Zimbabwe's land reform program has caused hunger in a country once considered the most fertile in southern Africa. Under the program, the government forced most experienced white commercial farmers off their land.
The president said he would try to pay the country's international debts, ease restrictions on imports, and make it easier for Zimbabweans to get hard currency. Currently, nine forms of currency are accepted, yet the country has a shortage of ready money or cash.
Mnangagwa's presidential inauguration was a surprise for many people, both in Africa and around the world. Earlier this month, on November 5, he was ousted from his position as vice president as part of a power struggle with Mugabe's wife, Grace.
Two weeks later, the 75-year-old politician became the leader of the southern African nation.
Known as the Crocodile, Mnangagwa has a strong relationship with Zimbabwe's army. Among the many tests he faces will be rebuilding the country's economy, which suffered during Mugabe's rule.
Previous government officials
The former president and his wife have been given immunity from legal action.
The military took control of the government after Mugabe dismissed Mnangagwa, and suggested he would appoint his 52-year-old wife as vice president.
Human rights groups have accused Mugabe of unfairly influencing elections and permitting corruption. They also say he was responsible for the torture and killing of thousands of political opponents during his long rule.
American Secretary of State Rex Tillerson has urged Zimbabwe's new leadership to hold free and fair elections. "The people of Zimbabwe must choose their own leaders," he said.
I'm Jill Robbins.

Voters wish to register their dissatisfaction with the ruling party.
选民希望表达他们对执政党的不满MC790mBPxtN。

In the treaty both sides pledge to respect human rights.
双方在条约中都承诺将尊重人权Z!5QTB)NAE(2。

His vice president also had to resign in disgrace
他的副总统也被迫不光彩地辞去职务%Uapy0B-j.E*waS~eVND。

5.Currently, nine forms of currency are accepted, yet the country has a shortage of ready money or cash.

has a shortage of 缺少；缺乏

China has a shortage of arable land resource, and water resources are relatively insufficient and uneven distributed in the country.
我国是个耕地资源短缺、水资源相对不足且分布不均衡的国家E8NfPBS8=Fk%。
Her campaign has faced a shortage of money, and she has helped finance it lately with personal loans.
她的竞选面临资金短缺问题，最近，她得到一些个人贷款的帮助9drT&8Wx~I(。

6.The military took control of the government after Mugabe dismissed Mnangagwa, and suggested he would appoint his 52-year-old wife as vice president. 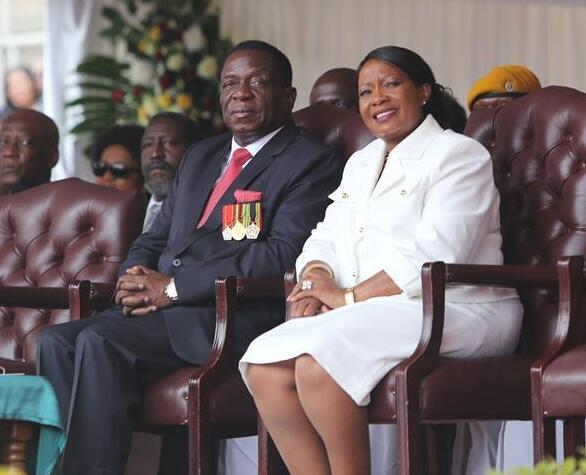