Former US Gymnastics Doctor Admits Guilt in Sex Abuse Case
A former USA Gymnastics doctor has told a court in the United States that he is guilty of sexual assault connected to his work with the national gymnastics organization and Michigan State University.
The man, Larry Nassar, now faces at least 25 years in prison.
He admitted to abusing seven girls at his home and in a Michigan State medical office. Six of them were gymnasts under his medical care. The abuse took place during what Nassar had called pain-relieving treatments.
Nassar faces similar accusations in other cases in criminal and civil courts. More than 125 women and girls are taking legal action against him. A federal court is also considering what to sentence Nassar for a child pornography conviction.
In April, American medical officials permanently barred Nassar from serving as a doctor.
American Olympic gymnasts Aly Raisman, McKayla Maroney and Gabby Douglas are among the women who have publicly said they were Nassar's victims. All three women were on the gold medal-winning Olympic team in 2012. Raisman and Douglas also won gold with the team in the 2016 games.
Douglas, who also won the 2012 Olympic all-around gold medal, confirmed on Tuesday that she was among Nassar's victims.
Raisman discussed the abuse earlier this month in a television interview on the news program 60 Minutes. She was highly critical of the way USA Gymnastics dealt with reports of sexual abuse.
USA Gymnastics is also facing legal action, as is Michigan State and the United States Olympic Committee.
Maroney wrote about her abuse last month on Twitter, as part of the #MeToo social media movement.
In a statement Wednesday, USA Gymnastics said "We admire the strength shown by Gabby and her teammates in speaking out publicly to hold a predator accountable....We are very sorry that any athlete has been harmed during her or his gymnastics career."
On Wednesday, Nassar admitted to putting his fingers inside of the victims. He said his actions had no real medical purpose and that he did not have the girls' permission.
The decision at the court in Ingham County, Michigan, requires a prison sentence of at least 25 years. A judge could sentence Nassar to as many 40 years, however.
Sentencing is set for January 12.
Judge Rosemarie Aquilina told Nassar Wednesday: "You used your position of trust ... in the most vile way to abuse children."
She called the accusers "superheroes for all of America, because this is an epidemic." By epidemic, she means childhood sexual abuse affects a large number of people.
After the hearing, one of the accusers, Larissa Boyce, said it was "really hard" to look at Nassar in the courtroom.
"This was a man we trusted. He's admitting what he did was wrong and evil," Boyce said.

Like many women, some sex workers have been the victims of a sexual assault during childhood.
与许多女性一样，一些性工作者是童年时性侵犯的受害者4L3Xd=#FJIYB。

For the homeless, private medical care is simply out of the question.
对于无家可归的人而言，私人医疗纯粹是天方夜谭saIqYE;F^4V~%vYj。

He said other things I cannot speak out for shame.
他还说了些我羞于启齿的话xLmL+p[RqV-^SD7。

5.The abuse took place during what Nassar had called pain-relieving treatments.

The interview took place on a Friday afternoon
采访是在一个星期五的下午进行的OB+Gp93DvEK)Y。
Another dust-up took place in the teahouse.
茶馆里又发生了一场打斗jl2fa+x;#zVbr。

6.She was highly critical of the way USA Gymnastics dealt with reports of sexual abuse.

I had made arrangements for my affairs to be dealt with by one of my children
我已经安排我的一个孩子处理我的事务hF@IJ@I((nh|u0Eh2LN。
They dealt with a slew of other issues.
他们处理了大量的其他问题3L~K|AnDA4。 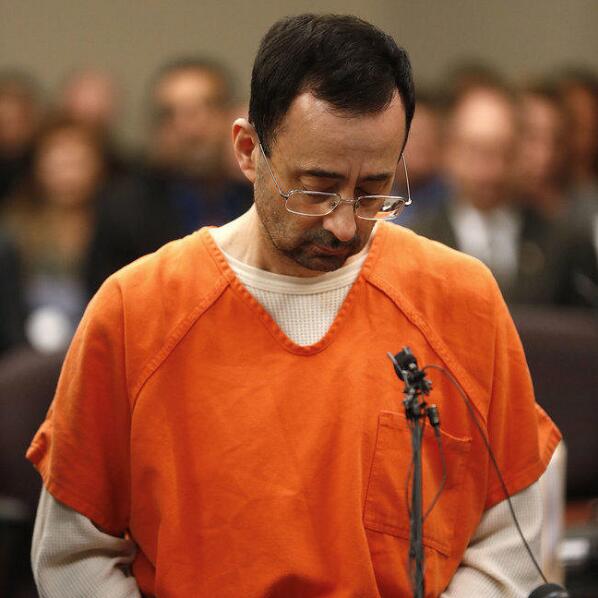