Leonardo da Vinci Painting Sells for Record $450 Million
A painting of Jesus Christ by Leonardo da Vinci has sold for a record $450 million. That is the most money ever paid for an artwork.
The painting is called "Salvator Mundi," Latin for "Savior of the World." It is one of fewer than 20 works by the Renaissance painter known to exist. It sold at an auction on Wednesday.
Before Wednesday, the highest-known sale price for any artwork had been $300 million for Willem de Kooning's painting "Interchange." Businessman Kenneth C. Griffin bought it in a private sale in 2015.
A Pablo Picasso's painting "Les femmes D'Alger" held the previous record for artwork sold at auction. It was sold in 2015 for over $179 million.
The sale of the da Vinci painting took place at Christie's auction house in New York City. Bidding for the piece opened at $75 million. The bidding lasted 19 minutes.
People inside Christie's cheered as the hammer came down to mark the end of bidding. The record sale price includes money that the unnamed winner must pay to the auction house.
Jussi Pylkkanen was the auctioneer and is Global president of Christie's. He told the Reuters news agency, "It was a moment when all the stars were aligned, and I think Leonardo would be very pleased."
The 66-centimeter-tall painting dates to around 1500. It shows Jesus dressed in Renaissance-style clothing. His right hand is raised in blessing and his left hand holds a crystal ball.
The painting was in a private collection of King Charles I of England. It disappeared from view until 1900, when a British collector bought it. At that time, it was thought to have been painted by a student of Leonardo rather than the master himself.
In 2005, a group of art dealers paid less than $10,000 for the artwork. It was badly damaged and partly painted over. They restored the work and proved that the painting was done by Leonardo da Vinci himself.
Russian billionaire Dmitry Rybolovlev bought the restored painting in 2013 for $127.5 million.
Christie's said most experts agree the painting is a work of Leonardo da Vinci. But critics say the restoration of the piece affects the work's authorship.
I'm Caty Weaver.

The price of petrol is coming down by four pence a gallon.
汽油的价格每加仑降了4便士aUXh4=-^c5PG_w.Cq0。

I peered into my crystal ball.
我凝视着我的水晶球xA!ct+~|~e|u#dKa。

Suddenly the door opened and a group of children burst in.
门突然打开，闯进了一群孩子oCZzH4^|g&J_L13XV;2U。

Another dust-up took place in the teahouse.
茶馆里又发生了一场打斗5DC&XP4kc*gpMba。
We have incontrovertible evidence of what took place.
我们有确凿无疑的证据证明到底发生了什么BIzJEbc~67[z。

6.At that time, it was thought to have been painted by a student of Leonardo rather than the master himself.

I cannot describe the feeling of contentment that was with me at that time.
我无法描述当时我满足的感觉n!28dyJ*dFUZp5ggX。
At that time, we were students.
那会儿我们还是学生kLc6]]Bq!&sqO。 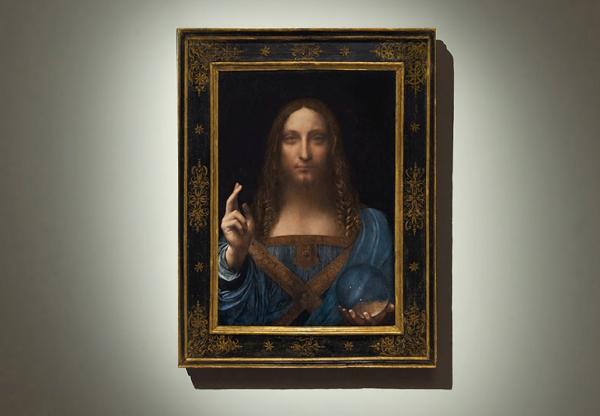