Women Land in Japan After 6 Months Lost at Sea
This is What's Trending today.
Two women landed in Japan Monday after their rescue from a damaged sailboat floating aimlessly in the Pacific Ocean.
Jennifer Appel and Tasha Fuiava and their two dogs had been lost at sea for almost six months. The Navy ship USS Ashland rescued them about 1,450 kilometers southeast of Japan.
Appel and Fuiava left Honolulu on May 3 sailing Appel's 15-meter boat, the Sea Nymph. They had planned for an 18-day trip to Tahiti. However, storms flooded the engine, destroyed the boat's starter and severely damaged the mast. The women could not use the sails effectively, as a result.
They tried to return to Hawaii. In June, they got within 1,345 kilometers of Oahu, Appel said.
"We knew we weren't going to make it," she said. "So that's when we started making distress calls. We were hoping that one of our friends who likes to go deep sea fishing and taking people out might have gone past the 400-mile mark and might have cruised near where we would be."
The women said they floated aimlessly and sent unanswered distress calls for 98 straight days. The women said they ran out of food for the dogs, Zeus and Valentine, and began sharing their own with the animals.
They were thousands of miles in the wrong direction when a Taiwanese fishing boat found them. Appel said she paddled on a surfboard to the Taiwanese boat and made an emergency call.
The USS Ashland happened to be in the area at the time to avoid a storm. The ship's commanding officer Steven Wasson said the Ashland traveled 160 kilometers and found the women the next day.
Appel told reporters on Friday that they were beginning to feel hopeless when they saw the U.S. Navy ship coming toward them.
"When I saw the gray ship on the horizon, I was just shaking," she said. "I was ready to cry, I was so happy. I knew we were going to live."
The U.S. Navy decided the Sea Nymph needed too many repairs to make it sea worthy. So, the sailboat was left at sea.
The women still hope it will be found and they can repair it. If not, Appel said they wanted to build an "unsinkable and unbreakable boat" and set out for Tahiti again.
"We still never got to see the 20,000 islands, so I think that would be the most fantastic trip for May of next spring," she said.
And that's What's Trending today.
I'm Caty Weaver.

I solemnly vowed that someday I would return to live in Europe.
我郑重发誓，总有一天我将回到欧洲生活+),vDoaVE!.QXcc。

When setting out on a long walk, always wear suitable boots.
每次出发远行，都要穿合适的鞋子1SceDx#XksVC]5XGB&。

A whole morning went by without a single emergency call.
一整个早上没有一个求救电话pks.RqC@IXA31。

I was just in grade school at the time, but I remember it perfectly.
那时我还在上小学，但是我记得非常清楚9L.#ewX9CTtr=9q。

5.The women could not use the sails effectively, as a result.

As a result, the bad thing has been turned into a good one.
结果坏事变成了好事KiyfXD^0p)。
As a result of this conflict he lost both his home and his means of livelihood.
这场冲突使他同时失去了住所和生计来源Gi*5KiJwUdP7。

going to make it 成功 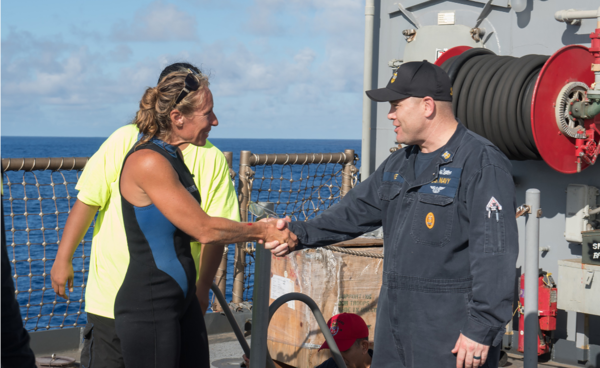