Einstein’s Note on Happiness Sells for $1.3 Million
This is What's Trending Today...
In 1922, German-born scientist Albert Einstein was traveling to Tokyo when he found out he had earned the Nobel Prize in Physics.
While in Japan, Einstein stayed at Tokyo's Imperial Hotel. During his stay, a hotel worker came to Einstein's room to make a delivery. Einstein found himself without any money to give the man as a tip for his services.
So, instead of money, the famous scientist handed the hotel worker a signed note with a sentence he wrote in German. It read: "A calm and humble life will bring more happiness than the pursuit of success and the constant restlessness that comes with it."
He gave him another note that read: "Where there's a will, there's a way."
Both notes were written on the Imperial Hotel's notepaper.
Einstein reportedly advised the man to keep the notes, saying they may one day be worth more than any tip he could give him.
The hotel worker must have listened to Einstein's advice.
Ninety-five years later, the hotel worker's nephew contacted Winner's Auctions and Exhibitions, an auction company in Israel.
On Tuesday, the notes were put on auction in Jerusalem. The price for the happiness note started at $2,000. About 25 minutes later, it sold to the highest bidder.
That person, who was not named, agreed to pay $1.3 million dollars.
The second signed Einstein note sold for over $200,000.
Einstein may be best known for his theory of relativity. In fact, the winners of this year's Nobel Prize for Physics earned the award for measuring gravitational waves -- an important part of Einstein's theory.
But now, his one-sentence theory of happiness is famous, as well.
And that's What's Trending Today...
I'm Ashley Thompson.

He had an affair, I found out and then all hell broke loose.
他有了婚外恋，我发现了，一切顿时天翻地覆MIUpU3sKvc+J!K])o。

He should pay and maintain you as well.
他得给你钱，还得供养你O.Qe7vy8kki%%;jgLo|。

He was too sick to travel to his son's side.
他病得厉害，不能赶到他儿子身边了#pspw8|zst。

They wore ordinary ties instead of the more formal high collar and cravat.
他们打着普通的领带，而不是更为正式的高领领结9B#zLwv2cKM4。

5.He gave him another note that read: "Where there's a will, there's a way."

6.During his stay, a hotel worker came to Einstein's room to make a delivery.

We will make a delivery in24 hours and send you the tracking number in via email.
我们会在24小时内发货，并且会通过邮件形式，发给你跟踪单号^)Gkyl~x*HSDJ%)=uI&。
You make a delivery hereyesterday morning?
昨天早上你是不是来这里送货？ 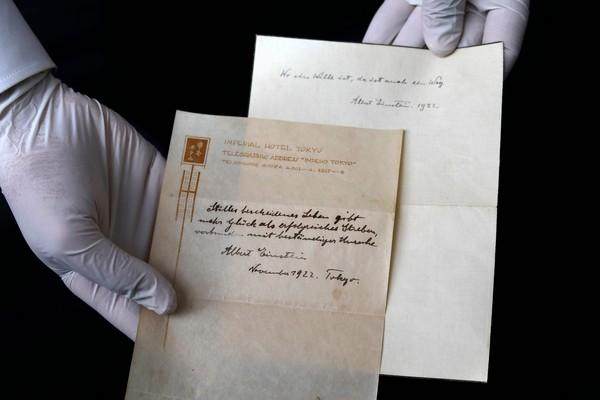