Taj Mahal Center of Political Dispute
India's most famous attraction, the Taj Mahal, is under attack by some members of the country's ruling party.
The most recent attack came from Sangeet Som, a lawmaker from the Bharatiya Janata Party, or BJP. According to Som, the monument is "a blot on Indian culture" that was built by "traitors."
This isn't the first time that India's Islamic past has come under attack by members of the BJP or other Hindu groups.
In Uttar Pradesh, India's most populous state, the government removed the Taj Mahal from its official tourism booklet. The booklet was published earlier this month.
The federal government, led by Prime Minister Narendra Modi, has been accused of trying to change history textbooks – especially India's past of Muslim rulers.
Som's comments drew criticism from federal lawmaker and Muslim leader Asaduddin Owaisi. He asked if the government would urge tourists not to visit the Taj Mahal and other monuments built by India's former Muslim rulers.
The BJP distanced itself from Som's comments. The party's general secretary, Vijay Bahadur Pathak, said the Taj Mahal is part of Indian pride. "Whatever Som said is his personal view. BJP has nothing to do with it," he noted.
Mughal Emperor Shah Jahan had the Taj Mahal built between 1632 and 1654 for his favorite wife, Mumtaz Mahal. He planned on being buried with her.
The Taj Mahal complex has their graves as well as several other graves of lesser Mughal royalty.
The monument is India's top tourist attraction. It draws some 3 million visitors every year.
I'm John Russell.

The town has been under attack by rebel groups for a week now.
一周来，该镇一直受到叛军的袭击JhG12)2|8amS&raAtW。

The walled city is an important tourist attraction.
这座由城墙围绕的城市是个重要的旅游胜地MF(rtiwgG|t%N=!4x.。

They both played the game according to the rules.
他们俩都依章行事(UzzsTZ5#p&F。

Voters wish to register their dissatisfaction with the ruling party.
选民希望表达他们对执政党的不满,f2_y6)^V^%。

5."Whatever Som said is his personal view. BJP has nothing to do with it," he noted.

has nothing to do with 与...无关

6.The Taj Mahal complex has their graves as well as several other graves of lesser Mughal royalty.

They visited some factories, hospitals as well as the school.
他们参观了这所学校，还参观了工厂和医院kj*Up(3H7rmSr(@Ubs。
Whoever did him in removed a man who was brave as well as ruthless.
无论谁杀了他，都是除掉了一个既勇猛又残忍的人X)Vbs~4kj_gg。 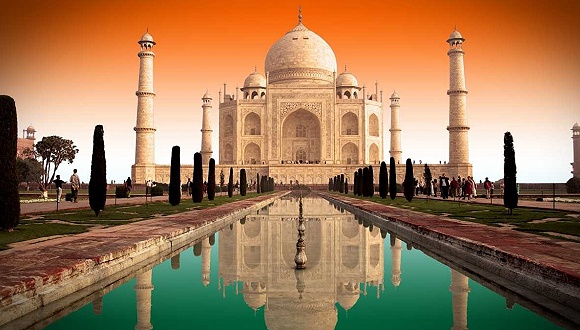