Emma Stone Used Dance to Prepare for Role as Billie Jean King
American actress Emma Stone admits she has never played tennis.
So to play the role of tennis champion Billie Jean King in the new film Battle of the Sexes, she prepared her body using a different exercise: dance.
Battle of the Sexes tells the story of King's 1973 exhibition match against former men's champion Bobby Riggs, played in the film by Steve Carell. It also tells the story of King fighting for equal pay and against sexism in sports.
Stone, who is 28, and King, the 73-year-old tennis great, became good friends while making the movie.
King said, "I tried to put myself in Emma's shoes. That's really taking a risk portraying someone who is still alive. I‘m like, ‘God, that's a little pressure."
Stone won an Oscar earlier this year for her work in the musical movie La La Land. In that film, she had to sing and dance. So she practiced her footwork and body movements to play King.
"I danced, so footwork was good. (And) I had been on stage before and when Billie Jean went out onto the tennis court it felt like her stage, so she really keyed in on that," Stone said.
Stone also practiced basic tennis moves like serves and cross-court backhands. But even after weeks of work, she still struggled with the simple things related to the sport.
Stone said, "We went to the U.S. Open ... and I was sitting next to Billie Jean, and Sloane Stephens was catching balls and tucking them in her skirt and bouncing them with the racquet.
"It's just little in-between stuff but that took me months to learn!"
King herself worked with the film's screenwriter. She recalled her experiences in the sport in the early 1970s. At the time, she was trying to establish a professional tour for women. There was also her match against Riggs.
King beat Bobby Riggs in that famous Battle of the Sexes tennis match. More than 50 million people watched it on television.
King says she is not surprised that women are still fighting for equal pay.
She said, "If you read history, you realize how slow progress is and that it's each generation's job to try and move the ball forward."
"We've come further, but we've a lot further to go," King said.
Battle of the Sexes opens on Friday, September 22, in theaters across the United States.
I'm Caty Weaver.

He is still fighting for his life in hospital.
他仍在医院与死神搏斗tTyP~eH2F_PQFmjdO-B。

He will play the role of a young teacher.
他将要扮演一个年轻教师的角色eyqbz(O)igun@U。

1.King said, "I tried to put myself in Emma's shoes.

put oneself in one's shoes 站在某人的立场

I always try to put myself in the other person's shoes.
我总是努力替别人着想mnX3!OfN9qj7Kawic。
You would understand my decision if you put yourself in my shoes.
如果设身处地地从我的角度想，你就理解我做的决定了AL;fO3BpB9%Ol;!Iiak。

2.That's really taking a risk portraying someone who is still alive.

I wasn't consciously aware I was taking a risk.
我没有清醒地意识到我正在冒险0yZz%OnOujRL8MYLc.Y。
Im talking about taking a risk that will improve your life.
我的意思是去冒险来改善你的生活h=,C#pmqNqn2。 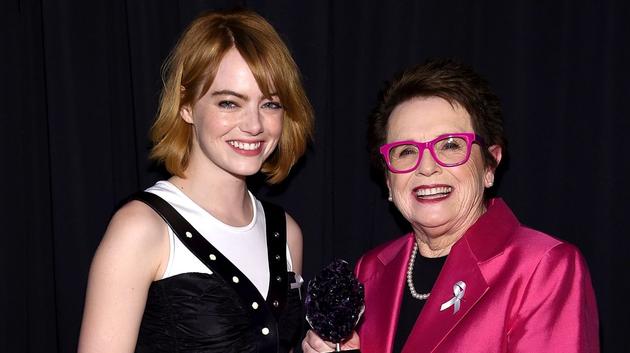