Protests Continue After 80 Arrests in St. Louis
A racially mixed crowd of demonstrators marched quietly Monday morning in the American city of Saint Louis, Missouri.
The demonstrators were protesting a court decision to drop charges against a white former police officer in the shooting death of a black man.
The march followed three days of peaceful protests and three nights of violence in St. Louis.
The unrest began when a judge said he found Jason Stockley not guilty in the 2011 death of Anthony Lamar Smith. The former officer had been charged with killing Smith after a car chase.
Prosecutors accused Stockley of placing a gun on the body. They also said video recorded from his car during the chase captured the officer saying that he was planning to kill Smith.
The judge ruled that the lawyers had failed to prove the shooting was not a justified use of force in self-defense.
Protests started peacefully on Friday, with hundreds of people gathering in the streets of St. Louis. They held signs and shouted the words, "No justice, no peace." Some made their way to police headquarters, calling for police resignations.
On Sunday, more than 1,000 people had gathered at police headquarters and then marched without trouble through the center of the city. Protesters also marched through two shopping centers in a wealthy area of St. Louis County.
By sunset, most protesters had gone home. Those who remained grew increasingly angry as they returned to downtown St. Louis.
Along the way, they broke windows and damaged other property. Police accused some demonstrators of firing an unknown substance on officers. Police said they seized weapons and arrested more than 80 people after demonstrators ignored orders to leave the area.
Police chief Larry O'Toole told reporters early Monday that some people attacked officers and threw stones at them.
"We're in control," O'Toole said. ""This is our city, and we're going to protect it."
Racial tension in the St. Louis area is not new. In August 2014, two weeks of protests began in Ferguson, Missouri, after a white police officer shot and killed Michael Brown, an unarmed 18-year-old black man.
That November, the decision not to charge the police officer fueled another week of protests. And a third protest was held in 2015 on the anniversary of Brown's death.
I'm Caty Weaver.

Mr Calder tried to leave the shop but the police officer blocked his path.
考尔德先生想离开商店，但是那位警员拦住了他oBWD#=_3okW6。

You can see more museums, parks an shopping centers here and there.
你能看到更多地博物馆、公园和购物中间，触目皆是f%DBm.Cnf*=J。

He has been charged with extortion and abusing his powers.
他被控犯有敲诈勒索罪和滥用职权罪F#(j|;JkBz%|。

The Prime Minister is calling for new restraints on trade unions.
首相正在呼吁对工会施加新的限制措施7cKDN|c0lmX(ZjED4&B。

He was drunk and not in control of his faculties.
他喝醉了，浑身都不听使唤了v=QtjJjtNb5ok+sgqfD。
The government remained in control.
政府仍控制着局势9lSd2t;L1=3YaTNKL。

2.The demonstrators were protesting a court decision to drop charges against a white former police officer in the shooting death of a black man. 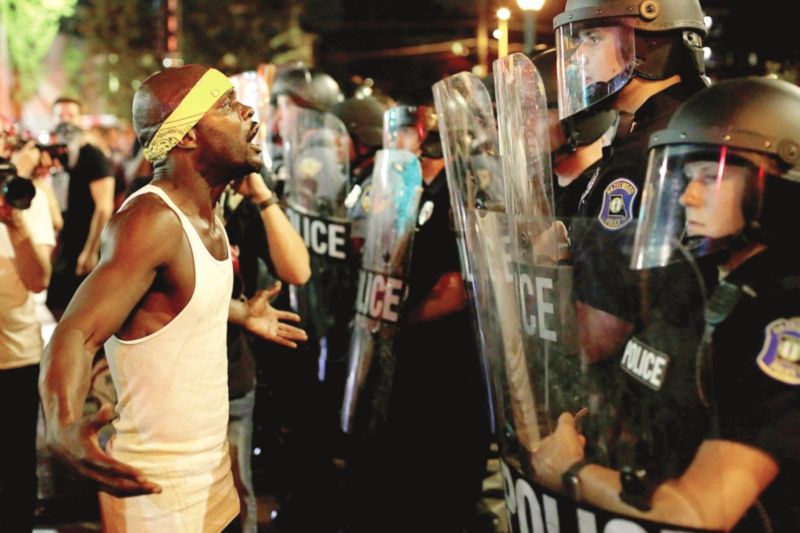