Singer Selena Gomez Reveals Kidney Transplant
This is What's Trending Today...
Singer Selena Gomez made her name acting in children's television shows. She was also singer Justin Bieber's girlfriend for a while.
But recently she is better known for her music.
In fact, she has one of the top songs of the summer.
Songwriter and DJ Kygo's song "It Ain't Me" features Gomez. It is ranked 20th on Billboard.com's current summer music chart.
You might think Gomez would have been singing at concerts around the world or appearing on television shows to talk about her music.
But instead, she was preparing for a serious medical procedure.
Gomez is the world's most popular person on Instagram. She has over 125 million followers.
On Thursday, she used Instagram to explain why she was "laying low" this summer.
She posted a photo of herself in a hospital bed with her friend Francia Raisa. She said she needed a kidney transplant because of the disease lupus.
Gomez received a kidney from her friend. Humans are able to live without one of their two kidneys.
Lupus is a condition that affects a person's immune system. An immune system that works well fights diseases and viruses.
According to the Mayo Clinic's website, lupus causes the body's immune system to attack its own organs and tissue. Organs affected by lupus include the kidneys, brain, heart and lungs.
Gomez thanked her doctors and her friend. She wrote that she "looks forward" to being able to tell the story about her experience sometime soon.
She called Raisa her sister and said donating a kidney was the "ultimate gift and sacrifice."
Raisa is an actress and model. She appeared in a well-known television show called "The Secret Life of the American Teenager."
Many people reacted to Gomez's Instagram post. They offered support for Gomez and they told Raisa what a great thing she did by donating her kidney.
One user, Ingrid Talledo, wrote: "@franciaraisa, you deserve the sky. Thank you so much for everything that you did. You deserve all the love of the world."
Gomez has been dealing with lupus for several years. In 2014, she had chemotherapy to treat the disease.
And that's What's Trending Today.

From commercials she quickly graduated to television shows.
她很快就从拍商业广告上升到拍电视节目sl@Mk9xs5voIw56#。

His supporters have reacted to the news with elation.
他的支持者听到那条消息后兴高采烈u5,N-S(=OK86*-c。

Yoga can be used to strengthen the immune system.
瑜伽能增强人体免疫系统6v0DzX47%nU。

He works well together with them.
他同他们一起工作得不错f!ugmO(9NN~c5!V&~IF4。

1.She was also singer Justin Bieber's girlfriend for a while.

They walked on in silence for a while.
他们继续默默无语地走了一会儿~O|O)i#M(cr=6,K。
We are off for a while.
我们要离开一会儿JHB[kbi|w#,1Q!a%dIIj。

2.She wrote that she "looks forward" to being able to tell the story about her experience sometime soon.

He does not glory in his past successes and looks forward to achieving more.
他没有陶醉于过去的成功，而是期望取得更大的成就@^b.pLbVH6f~J。
My family looks forward to seeing you next week.
我的家人都期待在下星期看到你4+g#THr_QwVup。 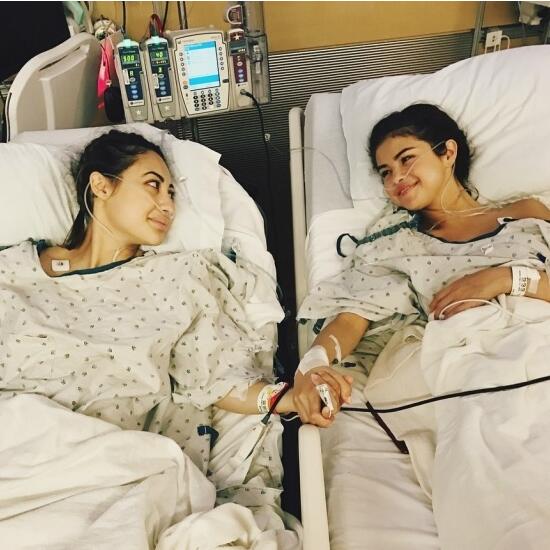