Houston Restaurant Sends Rescue Boat for Flood Victims
This is What's Trending Today.
There have been a lot of stories about people being rescued from flooded homes in and around Houston, Texas.
Houston is the fourth-largest city in the United States. The area has received over 120 centimeters of rain in just a few days. Many Houston neighborhoods are flooded.
Many people decided to wait out Hurricane Harvey when it first hit southeast Texas on Friday. But after so much rain, they found the water had entered their homes and they needed to leave.
That is what happened on Monday to J.C. Spencer and his wife Karen, who live in north Houston.
"We had to get out of there," J.C. Spencer told the television show Good Morning America.
With local police and fire department crews overwhelmed with life-saving efforts, some Houston residents had trouble getting help.
Some people said telephone calls to 9-1-1, the number U.S. residents call when they are in danger, were going unanswered.
The Los Angeles Times newspaper reported that some Houston residents calling 9-1-1 found out their call would not be answered for over two hours.
So many residents turned to social media websites like Twitter and Facebook and posted messages asking for help.
The Spencers had another idea. They called a restaurant where they often had dinner.
The restaurant is Chick-fil-A, an eatery known for both its chicken sandwiches and friendly workers.
When the Spencers explained their problem, the store's manager sent her husband to their house on a boat.
J.C. Spencer said the phone call went like this: "I called Chick-fil-A, now that sounds kind of funny," he said. "I ordered two grilled chicken burritos with extra egg and a boat."
The Spencers loaded their belongings onto the boat, but there was not enough room for them to get in. Next thing they knew, two more people riding Jet Skis arrived to help. A Jet Ski travels on water like a small boat, but moves fast, like a motorcycle.
The Spencers got on the Jet Skis and were taken to a safe place. They said they were "grateful" for the help.
A number of people reacted to the story on Twitter. One wrote: "don't forget to give that manager a raise!"
Another called it "the best story of the day."
And that's What's Trending Today.
I'm Dan Friedell.

We told him to wait out front with the engine running.
我们告诉他在外边等着，不要熄火A__7AdV9.c。

The factory reacted to our complaints by improving the working conditions.
工厂对我们的投诉的反应是改善了工作条件i0MP(AHtcP0fg。

The research begs a number of questions.
研究绕过了一些问题HK]RqD,ZY63sa[。

If the Conservatives got in they might decide to change it.
如果保守党赢得选举，他们可能会决定改变这一现状LlUUrNp^raNTs5dEa)JT。

1."We had to get out of there," J.C. Spencer told the television show Good Morning America.

I was screaming at them to get out of my house.
我尖叫着让他们离开我的家0+k)lXSK8ql.0mrS。
I could hardly wait to get out of there.
我迫不及待地要离开那里ba%mz@mzTIBR。

2.Some people said telephone calls to 9-1-1, the number U.S. residents call when they are in danger, were going unanswered.

Your life is in danger.
你的生命正处在危险中fRR&6IF8Ui[Y。
He was in danger of making a real cock-up of this.
他很有可能会把这事弄得一团糟qTxvW-b|IaM。 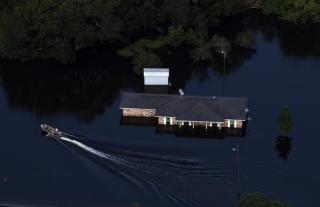