Old Airplanes Left in Elephant’s Shelter Get New Homes
Over 100 years ago, Britain's military had about 2,000 de Havilland DH.9 airplanes.
The military used the planes for British bombing raids over Germany during World War I.
The DH.9s were known as "strategic bombers." They were one of the first warplanes where pilots did not drop bombs by hand.
The bombs were stored inside the fuselage, or main body, of the plane. Pilots released them by opening a door with a lever. The plane was large enough to carry two large bombs or four smaller ones.
Of the 2,000 DH.9 planes used in World War I, only about six were saved. Or at least that is what people thought until about 20 years ago, when several DH.9s were discovered in rural India.
Britain donated those planes to India, then a British colony, at the end of the war. The website AirHistory.org.uk says India received 60 of the aircraft.
For many years, people thought nearly all the DH.9s were destroyed or used to supply parts for other planes. That changed in 1998, when a lover of historic aircraft found several DH.9s in India in an unusual place: a building where an elephant was once kept.
Janice Black is the director of Britain's Historic Aircraft Collection.
"Sadly, the engines were taken out and the aircraft were put into an elephant stable. The engines were then used to help to pump water around the estate – which is where we retrieved them from. And the aircraft themselves were left in the elephants' stable, which was fortunately very dry."
What was left of the old airplanes was purchased and shipped back to England for restoration. The repairs took about 60,000 hours.
In 2007, the Imperial War Museum bought the first restored DH.9 for about $1.3 million, but it does not fly.
The planes are important in the timeline of military history. But they were not especially successful warplanes.
Their engines that were not very strong, so the military could not depend on them in battle.
However, after the war, many were used to carry mail and even passengers.
The Historic Aircraft Collection team is working to restore another DH.9. This time, they hope to make it airworthy and fly late this year.
I'm Dan Friedell.

World War I was first of its kind in history, but not the last.
第一次世界大战在历史上是空前的，但不是绝后的战争j9ad9z%U=7X)08jT=i3。

Many farmers have to depend on subsidies to make a living wage.
许多农民的基本生活工资要靠补贴来维持lmA]KaiRH!@-aTh。

The president was absolutely right in ordering the bombing raid.
总统下令发动空袭是绝对合乎道义的81r1~E]~8xY|3)。

1.Sadly, the engines were taken out and the aircraft were put into an elephant stable.

I got an abscess so he took the tooth out.
我牙龈脓肿，所以他就把那颗牙拔掉了4Nr^+G*UP=VHGuc+fOA。
Jessica's grandparents took her out for the day.
杰茜卡的祖父母带她出去玩了一天p-J+qAaoIS.YqvL,-。

2.Sadly, the engines were taken out and the aircraft were put into an elephant stable.

The state of their marriage has been put into the public domain.
他们的婚姻状况已公开!C||MoJJ]hKh]h+;GZ。
Colin had been put into a bath and been scrubbed from head to foot.
科林被放进浴缸，从头到脚仔仔细细洗了个干净Be6ctF!rGb。 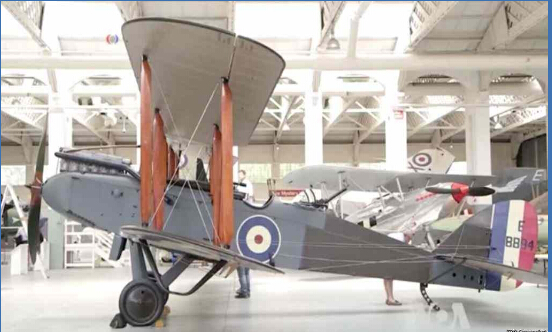