Long-lost $160 Million Painting Returned to Museum
This is What's Trending Today.
An abstract painting called "Woman-Ochre" is a work of the famous Dutch-American artist William de Kooning.
The painting used to hang in The University of Arizona Museum of Art.
That is until "Woman-Ochre" was stolen from the museum in 1985.
It had not been seen since then.
But that changed recently when a man who sells artwork and furniture visited a home in a small town in New Mexico.
David Van Auker sells old furniture and paintings in his store in Silver City, New Mexico. He was invited to a home nearby to see if there was anything he wanted to buy so he could sell it in his store.
At first, Van Auker thought he found a print of the de Kooning painting. Upon a closer look, however, he realized it was real paint on canvas.
Van Auker thought perhaps the home's former owner liked to paint and made a copy.
Eventually, he bought the painting and everything else in the home for $2,000.
When Van Auker put the painting up for sale at his store, some people said they thought it was an original.
That made him think. So he researched the painting and found a story from a newspaper in Arizona. The headline read: "De Kooning Painting Valued at More Than $100 Million Missing for 30 Years."
The painting looked exactly like the one he had in his hands.
So he called the university and told the museum he thought he had its missing painting.
After a number of telephone calls, Van Auker took photos and emailed them to the university. They were sure he had something important. So the next day, a number of people drove about three hours to Silver City.
The group borrowed the painting and brought it back to the school in Tucson. After careful study, they decided it was the original, stolen 32 years ago.
De Kooning made the painting in the 1950s. A similar painting sold in 2006 for $137.5 million. Experts say the recovered "Woman-Ochre" may be worth $160 million.
Meg Hagyard is the acting director of the museum. She thanked Van Auker for returning the painting.
She called its recovery a "monumental moment for the museum."
Van Auker said the experience of finding the lost painting was "one of the most important moments in my life."
And that's What's Trending Today.
I'm Dan Friedell.

Since then he has been drawing a pension.
从那时起他一直领退休金(NB6-+Wb*-]y0vKx,。

At first they all thought I was a loony.
一开始他们都以为我是个疯子*Lsk5qiJrC1d.f。

Their friends suggested they should put up their prices.
他们的朋友建议提高价格rtSHh2GyT,l29。

He died after a brave but unavailing fight against a terminal illness.
在与绝症进行了一番勇敢但却徒劳的抗争之后，他还是去世了)#t,YzJ%[M^f5ETyqNhB。

1.The painting looked exactly like the one he had in his hands.

2.The group borrowed the painting and brought it back to the school in Tucson.

What if he got a guilty conscience and brought it back?
要是他觉得内疚，把东西拿回来了怎么办？
I must have brought it back after the lecture this morning.
今天下午下课之后，我肯定把它带回来了oG5df57Fi.。 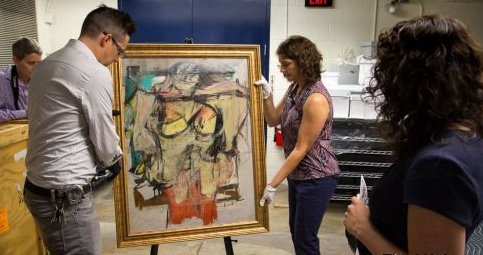