Terrorists Again Using Vehicles to Carry Out Attacks
Once again, terrorists have used vehicles to carry out deadly attacks – this time in Spain.
At least 14 people were killed in two attacks in different areas. More than 100 others were injured.
On Thursday, a van struck a crowd on a busy street in the Spanish city of Barcelona. The attack took place on Las Ramblas, a road leading from the center of the city to the coast. The area, which has many stores and restaurants, was filled with people enjoying a summer day.
Police said the driver of the vehicle fled on foot.
The second attack happened early Friday about 130 kilometers south of Barcelona in the seaside town of Cambrils. Attackers drove a passenger car into a crowd, killing one person and injuring at least five others.
Police said they killed five attackers after the incident in Cambrils. Spanish officials said it appeared the attackers had explosives tied to their bodies, but the bombs turned out to be fake.
The Islamic State group claimed responsibility for the latest violence.
Officials said at least four suspects – three Moroccans and a Spaniard – were arrested.
One of the arrests was made in Alcanar, a town south of Barcelona. Police said one person was killed in an explosion at a home there on Wednesday. The area is being studied for possible links to the other attacks. Police reportedly believe people at the home may have been "preparing an explosive device."
Spanish Prime Minister Mariano Rajoy said the latest attacks showed that the fight against terrorists is a "global battle." He noted that, in his opinion, terrorism is Europe's biggest problem.
The killings in Spain followed several deadly attacks in Europe in recent years, several of which also involved vehicles.
In June, three attackers drove a van into people walking on the London Bridge. The attackers then stabbed people in nearby bars. A total of eight people were killed and more than 40 others injured.
Another attack in London took place in March near Britain's parliament. In that incident, a car struck people walking on Westminster Bridge. Five people were killed and over 20 others injured. One of the dead was a policeman, who had been stabbed.
In April, attackers used a truck to kill five people in Stockholm, Sweden.
In December 2016, another truck drove into a crowded Christmas market in central Berlin, killing 12.
Five months earlier, an attacker drove a large truck into a crowd celebrating Bastille Day in the French city of Nice. Eighty-six people were killed.
A vehicle also was used last weekend to attack protesters in the American city of Charlottesville, Virginia. A man described by a former teacher as a supporter of the American Nazi Party drove his car into the crowd. One woman was killed in the attack. Two Virginia state policemen responding to the violence died in a helicopter crash.
I'm Bryan Lynn.

The interview took place on a Friday afternoon.
采访是在一个星期五的下午进行的UecT[bK%Gr#4_R。

Once again he was disappointed in love.
他又一次失恋了TG%gTQbeTfTu!Z。

Police say they believe the attacks were carried out by nationalists.
警方说，他们认为袭击是民族主义分子发动的epa%J;pAlDu,=d8y8。

His whole life is a fight against poverty and unemployment.
他的一生是与贫苦和失业斗争的一生~MF88bN^I,=wcWCS4。

1.Spanish officials said it appeared the attackers had explosives tied to their bodies, but the bombs turned out to be fake.

He ran a lot of tests and it turned out I had an infection called mycoplasma.
他进行了多项检查，最后证明我感染了支原体ZxVU~]w%CGJzZ^。
Things turned out as he predicted.
他的预言证实了Q,g2aYRxc,O)GaDS。

2.He noted that, in his opinion, terrorism is Europe's biggest problem.

In his opinion, my condition was perfectly fine for my age.
在他看来，我的身体状况和我的年纪十分相当I(V0K(Ev()kcd+!]。
In his opinion, holidays are a waste of time and money.
他认为度假浪费时间和金钱-*8|nRV9!7。 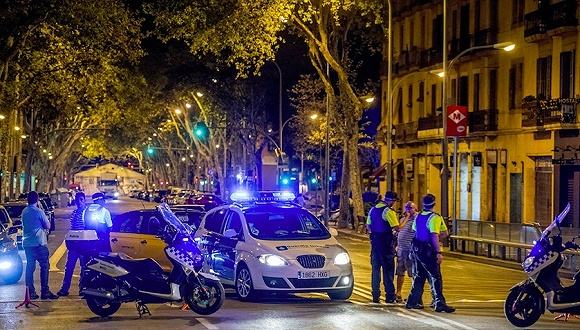