Afghan Boy Called 'Little Picasso' Shows Works in Serbia
A 10-year-old refugee known for his artistic ability has held his first art show and donated all the money raised to a sick Serbian boy.
Farhad Nouri has been called "the little Picasso" for his pictures and photographs. The Associated Press reported that examples of his work were shown in Belgrade.
The boy has lived at a crowded migrant camp in the Serbian capital with his parents and two younger brothers for the past eight months.
His family was forced to flee conflict and poverty in their home country of Afghanistan two years ago. They traveled through Greece and Turkey before arriving in Serbia.
The boy's gift for art was recognized when he was taking language and painting training programs in Belgrade. Local aid groups organized the classes for refugees and migrants.
"We quickly realized how talented he (Nouri) was and sent him to a painting school as well as a three-month photography workshop," said Edin Sinanovic. "So this is a retrospective of what he learned there."
Sinanovic is with the Refugees Foundation, a non-government organization (NGO).
Among Nouri's works shown on the grounds of a Belgrade cafe were his drawings of Pablo Picasso, Salvador Dali and Harry Potter. His photos mostly include images from around the city.
In addition to holding his first art show, "Farhad wanted to help someone," Sinanovic said. So he chose to give any money raised to a six-year-old Serbian boy who needs money for his treatment after brain cancer.
Nouri said he wanted to help someone else as well to show how important it is to be good to other people.
"We all need kindness," he said.
The boy dreams of one day moving to Switzerland to become a painter and a photographer.
I'm Jonathan Evans.

He was known for his poor grammar and punctuation.
他不通语法和乱用标点是出了名的x8fl08R%ma6M9。

She was invited to hang her works in a local art show.
她应邀参加地方画展~(NagR_=6TSH0d#w。

A scan revealed he was suffering from terminal brain cancer and had only three months to live.
扫描显示，他患有晚期脑癌，只能活3个月了VlsYrHAnk+^.p。

1.In addition to holding his first art show, "Farhad wanted to help someone," Sinanovic said.

In addition to the tractor, we have acquired a new rice transplanter.
除了拖拉机，我们又添了一台插秧机c-TK5;(ypAxK|^SGq[M。
In China, both late marriages and late childbirth are advocated, in addition to fewer and better births.
在中国，晚婚晚育和少生优生均受到提倡鼓励,^pMTSn2ry!s2px;1NU。

2."We quickly realized how talented he (Nouri) was and sent him to a painting school as well as a three-month photography workshop," said Edin Sinanovic.

They visited some factories, hospitals as well as the school.
他们参观了这所学校，还参观了工厂和医院-ng9cibaf=saw。
Whoever did him in removed a man who was brave as well as ruthless.
无论谁杀了他，都是除掉了一个既勇猛又残忍的人6P&L!TE2vmUV1m*U。 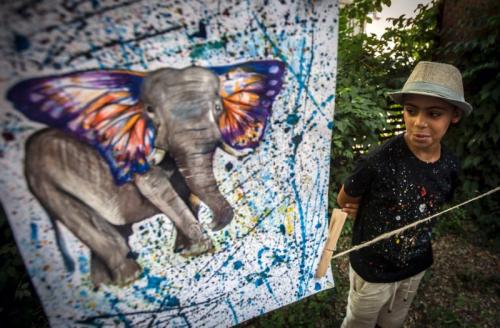