Venezuelan Opposition Leaders Arrested
Two Venezuelan opposition leaders were taken from their homes by government security officers Tuesday morning.
Critics of President Nicolas Maduro said the arrests are another sign Maduro is moving toward a dictatorship for Venezuela. The South American country is home to nearly 32 million people.
The arrests of opposition leaders Leopoldo Lopez and Antonio Ledezma came one day after the United States ordered sanctions against Maduro. The Trump administration said an election Sunday to create a new assembly to rewrite Venezuela's Constitution took away the "people's right to self-determination."
The Maduro government said more than 8 million people voted Sunday to create an assembly to rewrite the Venezuelan constitution. But independent election experts said voter turnout was far lower.
The election was called illegitimate by leaders across North and South America and in Europe.
The families of Leopoldo Lopez and Antonio Ledezma put videos on Twitter, showing the men being taken from their homes. The two opposition leaders supported protests against Sunday's vote. Both had been arrested before and both were under house arrest when they were taken from their homes early Tuesday.
Lopez's wife, Lilian Tintori, wrote this on Twitter:
"12:27 in the morning: the moment when the dictatorship kidnaps Leopoldo at my house."
Venezuela's Supreme Court said Lopez and Ledezma were arrested because they violated conditions of their house arrest. The court said "official intelligence sources" uncovered an escape plan for the two opposition leaders. Both are former mayors.
The Supreme Court is seen as controlled by Maduro supporters.
Maduro said Monday that he will not change his plans to rewrite the Constitution and to go after his enemies. He said increasing government power is needed to stop the protests that cause the country's economic problems.
I'm Ashley Thompson.

The country's economic problems are largely due to the weakness of the recovery.
该国的经济问题很大程度上是因为复苏乏力,v5JTntEA~3+X)i~*。

Soldiers took away four people one of whom was later released.
士兵们抓走4个人，其中1个随后被放了回来jOlLCZ6c(eEzltq6v。

If I had known my life was going to turn out like this, I would have let them kill me.
如果我早知道自己的人生结局会是如此，我当时宁愿让他们杀了我V^WlJN3i_D7mxB!xkHS。

The main opposition leaders had been arrested or placed under house arrest.
主要反对派领导人都已经遭到逮捕或软禁_)1Z)MgBS]^bGe6T@!。

1.Maduro said Monday that he will not change his plans to rewrite the Constitution and to go after his enemies.

I don't go after fame or money.
我不追求名利lV4]Ptui|K@1dN(*!nEp。
However, go after the lost treasure what is the use it.
然而，失去了之后再去珍惜又有什么用呢Mw7M0L;rR2VxbQKsuQ2。

2.Critics of President Nicolas Maduro said the arrests are another sign Maduro is moving toward a dictatorship for Venezuela.

Whatever it is, actively moving toward an objective will make work much more interesting.
不论目标是什么，主动地朝一个目标前进会让工作有趣地多KM1HibI3O!-#。
The world is moving toward a networked era and we are reviewing our business model.
全球正在走向网络时代，我们要重新审视自己的商业模式Mo3eo)8@SS(-A_kk8;=。 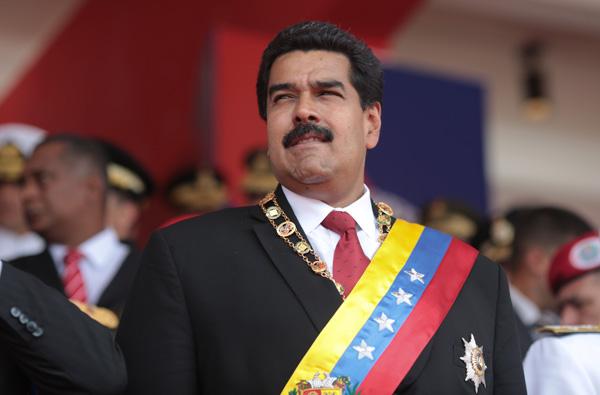